Last fall when I received an email from an 80-something reader signed “Susan in Berlin,” I had just been invited to join my Maryland family’s spring break trip there. I decided it would be great to meet a stranger who reads 80-something, so I responded to her email and invited her to meet for coffee.

I wasn’t convinced the trip would happen until I was strapped into my seat on Lufthansa.  I wasn’t sure I would meet Susan for coffee.  And both things happened except that it was dinner, not coffee, and Susan’s husband John and my pal Louise joined us.

We met at an Indian restaurant between our two neighborhoods.  With a name like Susan, I was sure she was an American living abroad.  Nope, she was born in East Germany.  As an 80-something reader, I was sure she would be near my age.  Nope, she couldn’t be more than mid-fifties.  She and her husband were completely charming.  They ordered for us, showed us how to eat what we ordered, and walked us back to our Airbnb.

Susan told me she had been reading the blog almost since its beginning.  I asked her why she was so loyal (even her husband reads it), and she told me that her mother was not aging gracefully and she was looking for a role model so she could do better.

I want to publicly thank Susan and John for being a highlight of our Berlin visit.

Many Germans speak English and happily help tourists in Berlin find their way.  However, on our vacation, I did learn a memorable German word:  Ampelmännchen, the name of the little-green-traffic-light man who invites us to cross a street when it is safe.

Unlike most of the world’s walk signs, the Ampelmännchen’s wide-stride and swinging arms encourage us to walk quickly. It is said that he was invented to make people pay more attention, and as a result, there are fewer pedestrian accidents in the city.

When the Berlin Wall came down in 1989, the East Berliners insisted on keeping their beloved Ampelmännchen.  And now he often appears in the former West Berlin too.

I usually avoid souvenirs when I travel, but I admit that I now enjoy my morning coffee from a white mug decorated with … the little green traffic man.

On July 29, 1981, Prince Charles wed Lady Diana, and the Kugels, with their 8- and 10-year-old sons, arrived in London for a home exchange in Blackheath, a nearby suburb. That was the beginning of several years of Kugel family overseas vacations.

On April 10, 2022, a Kugel contingent of six met in Berlin for the kids' spring break.  This time it was our grandsons, Leo and Grady Kugel, their parents, Jeremy and Katrina, and my adventurous neighbor Louise and me.

Louise and I made our own plane reservations.  Jeremy and Katrina picked the roof-deck-terraced, ultra-modern Airbnb in East Berlin.  And they did just about everything else.  They made the reservations at the Bundestag, planned where to eat, helped us get 7-day train passes on our cellphones and guided us on the public transportation. Jeremy even scheduled our “you can’t come home without them” Covid tests.

The baton has passed to a new generation.

I was thrilled to hear from so many of you in response to my “Who are you?” blog post. Fifty-five of you replied, and many sent photos.  Getting to know who reads 80-something was so much fun.  (Replies are still welcome.)

You are from many countries, including New Zealand, Germany, France, England, Brazil, Australia and Canada.  Ages range from a young man in Brazil who is reading 80-something to improve his English to several in their 90’s.  The respondent with the most great grandchildren (12) is from Australia. Two more are expected shortly!

You are predominantly female. You sound grateful for your lives, despite the challenges of ageing.

A Thing That Makes You Happy

For the second half of the semester in my learning-in-retirement program, I have two new courses, both on Zoom.  In one, “Have Cities Lost Their Mojo?” we are studying the challenges cities face, particularly the impact of the pandemic.

My second course is “The Science of Happiness,” a class limited to twelve participants.

We were asked to bring an object that makes us “happy” to the first class.  Some examples:  a photo of a beautiful view of mountains from the window of a class member’s vacation home, a coffee mug picturing family members, and a 600-year-old Tibetan ritual object. I brought a vase of fresh flowers because flowers never fail to cheer me.

But the object that caused everyone to ooh and ahhh was kept under the desk of a class member.  She reached down and collected an irresistible small black and white dog.  He snuggled into her lap.

That made everybody happy.

I try to not let the state of the world get me down.  Between the Covid pandemic, the war in Ukraine and our divided country, one could become despondent.

I am among the luckiest of lucky people.  But I do have my moments of struggling, and the past few weeks have been challenging.

Three weeks ago, the son of a friend died in an avalanche in Colorado.  A skilled mountaineer, forty-nine years old--it’s heart-breaking.

A single childhood friend died alone in her New York City apartment and wasn’t found until the doorman missed her.  Within days, a beloved former work colleague passed away.  Two other good friends are ill, one with Alzheimer’s and one not-yet-diagnosed, suffering from debilitating pain.

We are fortunate to live this long.  But some things are just hard.

Last August, Peter and I bought an apartment in the building where we were renters. The unit is at the end of the building so in addition to the beautiful view of the Charles River from our floor-to-ceiling front windows, we can see the red brick apartment building next door from the side window.

Not only did we get more daylight, there is a beautiful six-stories-high sycamore tree outside that window.  Yesterday, as I opened the blind, there was a man in a bucket raised from the truck below. He was trimming that tree.  If that window could be opened, I could have reached out to shake the hand he waved at me.

Today, when I pulled the shade open, there was a male cardinal at my eye level.  We stared at each other.  I didn’t move.  When he finally got bored, he left.

I knew I was going to have a good day. 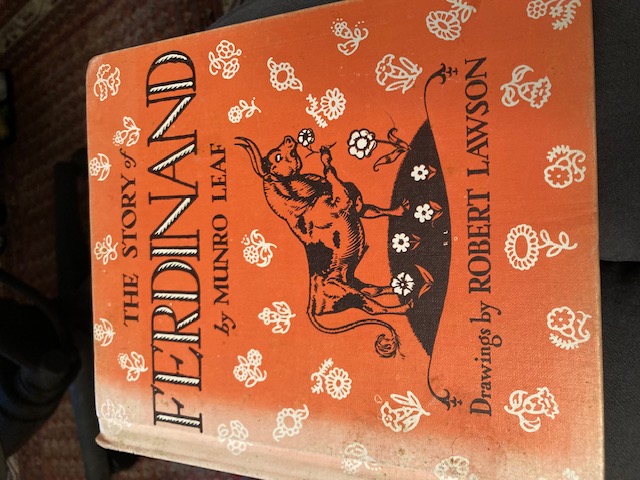 Pictured above is one of my favorite childhood books.  Published two years before I was born, I hadn’t given Ferdinand the Bull a thought in decades.

Until a friend showed me her copy of Ferdinand, a favorite from her childhood also, prominently displayed on a bookshelf in her office. She suggested that we read it out loud to one another.  I recognized every word, but she had the whole book memorized! Its story teaches children an important lesson--it’s OK to be different than everyone around you.

A lesson as important today as it was when Mother read Ferdinand to her three-year-old daughter Judy.