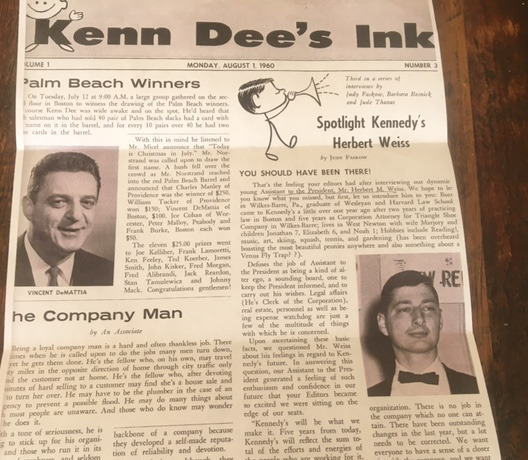 Long, long ago, in a land far away (so it now seems), I walked into the Office of the President of Kennedy’s, Inc. and into my first job after college.  Kennedy’s was a Boston-based chain of twenty men’s clothing stores.  I was the assistant to Herbert Weiss and shared an office with Barbara who is still a good friend.  I ran the daily sales numbers (on an adding machine—remember them?) and I was the editor of a new company-newspaper, called Ken Dee’s Ink.

Herb Weiss died a week ago at the age of ninety-two.  We had stayed in touch, and usually had lunch together once a year.

Yesterday I received a letter from my former office mate (she now lives on the West Coast). Included was a copy of the issue of Ken Dee’s Inc. in which I (then Judy Faskow) wrote about my boss of sixty years ago.

May he rest in peace.