Kids Do the Strangest Things

I’d like to report two recent events directed by our son Jeremy.

1.  A black squirrel with only a half of a tail whom they called “Blackie Half-Tail lived for years in the yard of our kids’ friends. Then one day recently they discovered his run-over body on the street in front of their house.

This was no ordinary squirrel, perhaps best known for somehow getting down the chimney and running through the friends’ house.

So Jeremy master-minded a funeral.  The two families dressed up for the occasion. (Jeremy wore his lilac tuxedo.) They made a printed program. (below)  Several speeches were delivered followed by the burial. 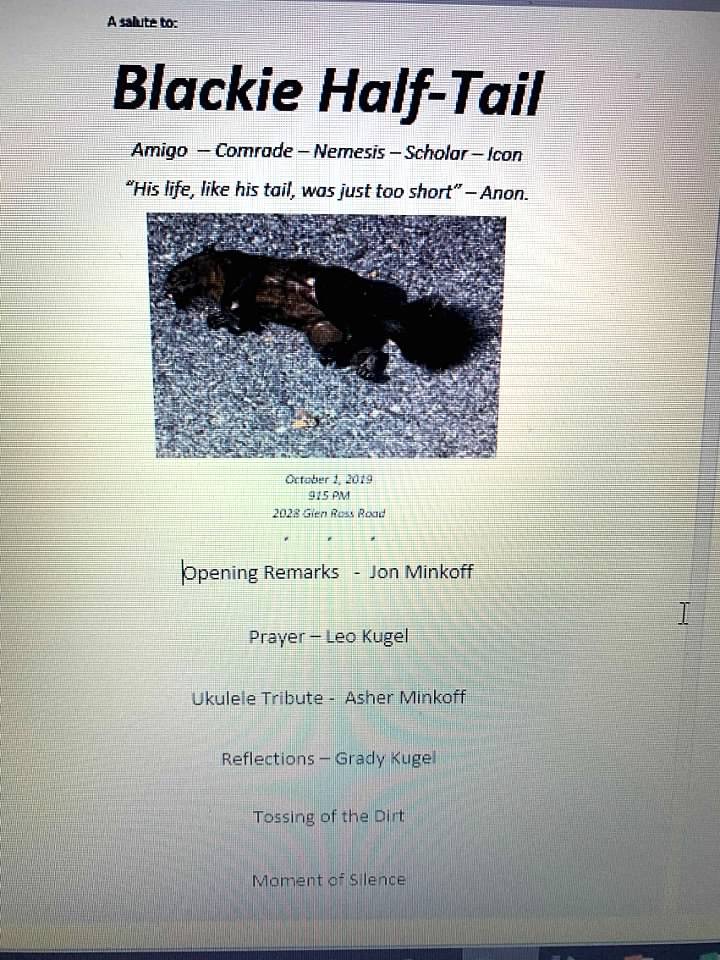 It was a memorable occasion.

2.  Close neighbors of Jeremy and Katrina joined us for Thanksgiving dinner. Their two daughters, Tess and Emily have been role models for our grandsons. Tess, a sophomore at UT-Austin, was celebrating her birthday the next day, and Jeremy decided to make a special cake to celebrate the coming event and as one of our Thanksgiving desserts.  Its architecture:   A bottom layer of brownies, a layer of ice cream, a layer of chopped up Snicker’s candy bars, a layer of peanut butter, a layer of Kashi chocolate cereal, a half-layer of sliced bananas, a layer of Vanilla Wafers, and another layer of brownies, topped off with marshmallows and sprinkles..

I joined everyone in singing Happy Birthday to Tess, but I stuck with the gluten-free apple pie.