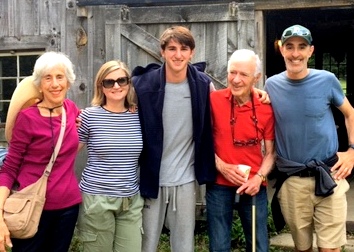 In 1980, we dropped off our son Seth for his first summer at Camp Becket in the Berkshire Mountains of western Massachusetts.  He was ten.

Who knew then that, thirty-nine years later, we would be back there to greet our fifteen-year-old-grandson Leo when he returned from his Becket “summer of service” in Vietnam?

Both Seth and his younger brother Jeremy had flourished at Camp Becket and we visited them there every summer for years. Now Jeremy lives in Maryland, so it took some persuading to convince our daughter-in-law Katrina to send their boys to Massachusetts when there were many fine camps closer to home.

In the past few summers, we have visited our grandsons at Becket on the Sunday of Dad’s Weekend, but this year was different.

After we visited with our younger grandson Grady on Sunday, we stayed nearby for two extra days to wait for Leo and fourteen fellow campers to return from five weeks of service in Vietnam.

It was a bit nerve-racking because protestors forced the shutdown of Hong Kong airport, their first stop on the way home, but once we learned they had landed in Vancouver, Canada, we were OK.

Suddenly Leo was there—looking taller, older, worldly and exhausted.  It was a short reunion because the Maryland family had a long drive home ahead and they had to be there in time for Leo’s soccer team tryouts first thing in the morning.