The fact that Memorial Day is a holiday is no excuse for skipping exercise, so Peter and I went off to the gym at about 9:15 a.m.  The Cambridge Memorial Day  parade was underway and we had a lot of trouble navigating the car around the closed streets.  When we finally got there, we found the gym closed for the holiday.  One of us had checked to make sure it would be open (I won’t say which one) and got it wrong.

So we walked to another Harvard Gym that was opened.  When we had finished exercising Peter decided to walk home from there, and I walked back to the car through Harvard Yard.

Commencement was three days away.  Tents were up, thousands of folding chairs were waiting to be unfolded, campus tours were in progress and a few graduates were posing for photos in their caps and gowns.

For many years, I (and the Dean) had led the Kennedy School’s students in cap and gown through the streets of Cambridge to the ceremony in Harvard Yard.  We were always accompanied by two policemen in full Scottish regalia playing bagpipes.

It was the culmination of a lot of work by the students, of course, but also by us, and we were ready for the school year to end.

This Memorial Day, as I walked through the Yard my eyes filled with tears.

Back in the 1970’s Keebler made a wonderful quarter-size sugar-and-cinnamon cookie called “Dutch Apple”.  They came in white fold-over bags.  We ate them by the handful—until one day when they disappeared from supermarket shelves.

So why was I so surprised about my shoe saga?  A few years ago, I discovered an amazing walking shoe.  It was made by women who left Keen Shoes to start Ahnu, a company that made women’s shoes exclusively.  Not only were they comfy, women found them so attractive that they often would ask me who made them.  Walking shoes!

The other day, I decided it was time to order my third pair.  Guess what?  Teva bought Ahnu and discontinued my shoe. I was devastated.

I ordered the recommended "substitute".  The shoes had different eyelets, were a dreary gray color, and difficult to put on.  Yet again, a product I depended upon had disappeared.

On the other hand, once I got them on, they were pretty darned comfy.

The Plus of Out-of-Town Guests

Until last weekend, we hadn’t had any out-of-town guests (other than our children) stay with us since we returned to Cambridge last August.

Last Friday, a childhood friend made her first visit to Cambridge that wasn’t dedicated to a child’s graduation or a college reunion so she stayed with us. She had never seen the American Wing of the Boston Museum of Fine Arts so that was our first stop (in the pouring rain).

Saturday, in contrast, turned out to be a glorious Spring day.  We took the subway downtown and walked the Rose Kennedy Greenway, a 1.5 mile series of parks and gardens opened in 2008 after the “Big Dig” had moved the highway that divided the city from the Waterfront underground (at a cost of more than $24 billion).

The Greenway's thousands of plant species reflect the season. (A ranger told us that with the help of volunteers, they planted sixty thousand bulbs last fall.) It has a carousel, sculptures and other art exhibits, many seating areas and fountains, fitness classes, tours, and more.  It’s a stone’s throw away from the Harbor Walk and the North End, Boston’s “Little Italy”.

In mid-afternoon, we drove to Lincoln, a beautiful suburb west of Boston and home of the DeCordova Museum and Sculpture Garden, where we joined visitors of all ages, grateful for a respite from what has been a very rainy spring.

Without our guest, I would have spent the day grocery shopping and doing laundry  or other tedious chores.

Anyone want to come for a visit?

Although I am not and will never be a Marie Kondo, I do like organization and cleanliness.  Whether we are living in a too-big house (as we were when our kids were growing up) or in a small apartment (as we are now, with just the two of us), spring cleaning time arrives every spring.  I hear my mother’s voice saying, “Time to start washing all your wool sweaters and don’t forget to carefully ‘block’ them while they dry on a towel.”  When you live in New England, that’s a lot of sweaters.  I’m still working on that project.

But I’ve put away my leather winter Merrills and unearthed my summer mesh ones. I’ve filled two grocery bags with clothes that I am sure I’ll miss once I get rid of them. And Peter has agreed to re-cycle lots of drafts of papers.

Fortunately, there’s a month to go ’til summer. 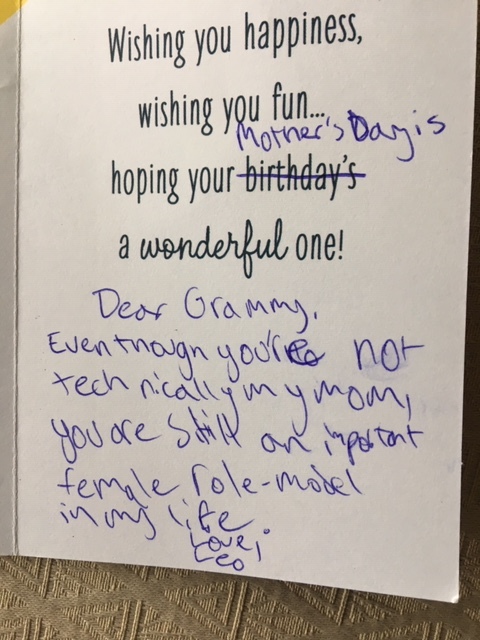 I can think of many ways to spend the $25 billion that retailers take in from Mother’s Day presents that might make the world better.  But I don’t feel that way about Mother’s Day cards.  I love them.  Our children are well into their forties and I think I have every card they ever sent–the first came from our elder son in utero.  They are often funny, but more often, I am moved to tears by their words.

We celebrated Mother’s Day with Jeremy and his family in Maryland over the weekend. On Monday morning, as always, I was feeling sad to leave.  But as our older grandson Leo (age fifteen) rushed out the door to go to school, he gave me the card you see above.

On the first weekend in May, Harvard has an arts festival that is free and open to the public.  There are student performances to appeal to all tastes, including concerts of popular music, classical music and jazz, theatrical performances, and art exhibitions   At one concert we attended in a small chapel on campus,  students of a class on the music of Schubert performed his songs and chamber music, their professor providing historical comments.  Much to our astonishment, many of the same students who played instruments, also sang Schubert's songs. The talent and poise of these students were remarkable.

Other plans prevented us from going to more than three of the more than eighty Arts First events on Saturday.

We’ve already blocked out the first weekend in May on our 2020 calendar.

I hadn’t heard of Sarah Lewis until I saw an announcement of Vision and Art. a “convening” on art, race, and justice that she conceived and organized.  Sponsored by the Radcliffe Institute, the Ford Foundation and others, it was open to the public. Peter and I went to three sessions.  The convening’s purpose was “to consider the role of art and culture in citizenship, race and justice” and to explore the ability of culture to change perceptions.

Sarah Lewis is an Assistant Professor in Harvard’s departments of History, Art and Architecture and of African American Studies.  You can see what she has achieved at the age of thirty-nine here.  In addition to being smart and accomplished, she is beautiful, charming, and unassuming.

The program included Wynton Marsalis, playing his trumpet with three other jazz musicians and participating in a discussion with former Harvard President, Drew Faust and, Artistic Director of the American Repertory Theater, Diane Paulus,  Chelsea Clinton interviewing the pediatrician who brought problem of lead in  Flint, Michigan’s water supply to the public’s attention, Brian Stevenson founder of the Equal Justice Institute, a young member of the cast of the TV show “Blackish” and an even younger (age twelve) activist for girls of color.

And the rest of the convening will be on YouTube shortly.

Spring in the Cemetery

When an eighty-one-year-old goes to a cemetery on her own two feet, that’s good.   When the cemetery is the nation’s first garden cemetery (Mt. Auburn, founded in 1831), it’s even better.  And when the trees and flowers are just blooming, it’s spectacular.

On a sunny end-of-April Sunday, Peter and I visited Mt. Auburn for the first time since our return to Cambridge last August.  Peter’s bright red walker made it possible for us to stroll leisurely up and down the winding roads, stopping to read the labels when we weren’t sure which kind of tree we were passing, or to get a close look at the lacy red leaves of the Japanese maples, or to gaze in awe at a distant hillside covered with trees blooming in shades of pink to purple, one of which looked like a huge serving of cotton candy.

We said “hello” to everyone we passed—kids in strollers, seniors like us, young lovers--and a lot of dead folks.

Walkin' in the Rain

Although the sky was threatening, I was determined to keep my date with a favorite walking pal.  Just as we met for our two-mile jaunt along the Charles River, the heavens opened.

We looked at each other, shrugged our shoulders and said in unison, “Why not?”  Neither of us had an umbrella, but our coats were “waterproof,” so off we went.

Although we had to strain our ears to hear each other for the first half of our walk because the rain, our hoods and the traffic noise made it hard to hear what our walking partner was saying, we managed to keep up our constant chatter, solving our own and the world’s problems.  It got worse after we crossed the River.  More traffic, speeding through huge puddles got us thoroughly wet.  We had to repeat ourselves or shout to be heard, but we were unstoppable.