On the morning of Christmas Eve, I walked to the gym. The weather report promised snow flurries but at 9:00 am, the sky was blue and the temperature almost balmy.

Going home, I decided to take a longer route along the Charles River. My thoughts drifted to the year about to end. It was a year filled with upheaval. I am not sorry to see it go.

On the other hand, I have so many things to be grateful for-- beautiful mornings, an amazing family, my wonderful friends and those of you who spend a bit of your time reading this blog.

The older we get, the more we fear falling. And with good reason. According to the Centers for Disease Control and Prevention one in three adults 65+ falls each year, accounting for 30,00 deaths annually.

In my view, it’s all about balance, and there are lots of ways to work on that. Exercise in general is good. Tai chi, is very helpful if you have the patience to practice it. (I don’t.)

On balance, here’s my routine. Every morning, I brush my teeth standing on my left leg. Every evening, I brush my teeth standing on my right leg. I don’t even think about it. I just do it. And once a day I put an exercise band around my ankles and balance on one foot while I kick the other leg out to the front five times, to the side five times, and back five times. It helps to focus on an object while you do it, as if you were a prima ballerina.

And much as I like looking at trees and people, when I am walking on the brick sidewalks of Cambridge, I spend a lot of time looking down.

My Uncle Milton was an obstetrician. I adored him. According to my mother, he put himself through medical school by selling hot dogs on a street corner. His wife, my Aunt Ruth, who died a couple of years ago at 104 was used to his leaving the house at all hours of the night. He delivered a significant percentage of the babies born in Buffalo, New York over the course of his long career. Back then, they didn’t have those medical partnerships that allow obstetricians to sleep through the night when it isn’t their night “on”.

I was thinking about that the other day when I met a new doctor and asked him how he felt about practicing medicine in these days of hurried appointments during much of which the doctor is typing on a computer. He said he didn’t know any other way. (He did look pretty young.) He added that the older physicians he knew didn’t have to do much typing because they saw far fewer patients and they could remember them. Today’s doctors take notes because they don’t have the luxury of getting to know people they see.

And it’s different for patients too. Although there are many modern medical miracles for which we are grateful, we have to be more aggressive in seeking care if we don’t want to get lost in the healthcare bureaucracy.

After I agreed to be this month’s guest speaker at the Women’s Breakfast Club in Concord, MA, I asked myself how I could possibly get myself up at the crack of dawn on a December morning and drive fifteen miles to speak to a distinguished group of women over 65. Knowing my luck, I would face a blizzard or at least a serious traffic jam.

It turns out that when I got out of bed, the sun was shining, and I got to the Colonial Inn in Concord with time to spare. The Inn, built in 1716, was at its Christmas-best, including a gorgeous display of gingerbread houses.

The welcoming audience of interested and interesting women made me feel like Michelle Obama on a book tour.

They listened to me for about thirty minutes, and then we had a great discussion about the issues and opportunities that 70-somethings face—like how it feels to be invisible, relationships with our grown children, even how it feels to be offered a seat on the subway.

It was over far too soon.

Our Son the Author 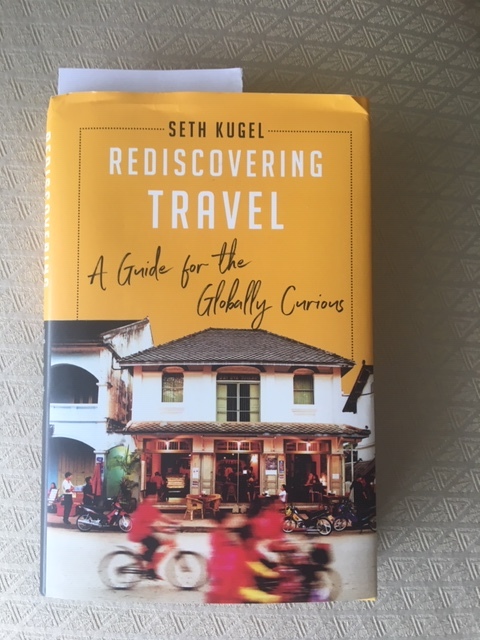 In seventh grade, Seth, our now-forty-eight-year-old son, had a leading role in a musical you’ve never heard of called “Winning Isn’t Everything.” In high school, he starred in Cole Porter’s “Anything Goes”. Since I can’t carry a tune and his father refuses to sing, it was quite a revelation that there was a spark of musical talent in our first-born.”

Fortunately, he didn’t pursue a stage career and although we have heard him speak before, his appearance on Monday in a popular Boston bookstore to read from his just-published book, Rediscovering Travel: A Guide for the Globally Curious  brought those earlier triumphs to mind.

The bookstore space was packed—camp friends, school friends, our friends and perfect strangers filled the room. The Boston Globe’s top travel writer interviewed Seth. I know I am his mom, but he was articulate, informative, amusing, and handsome. 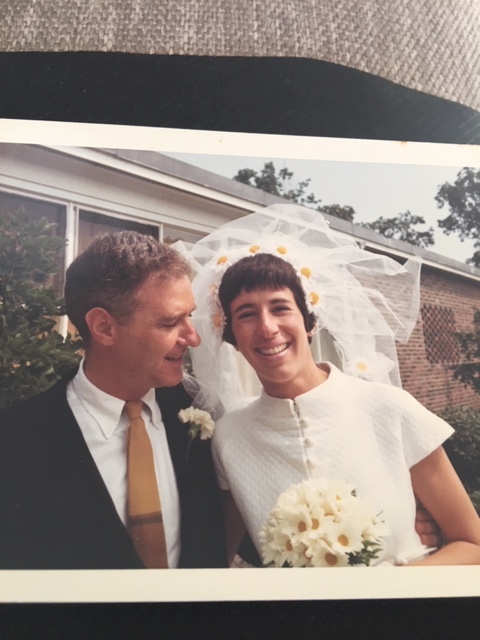 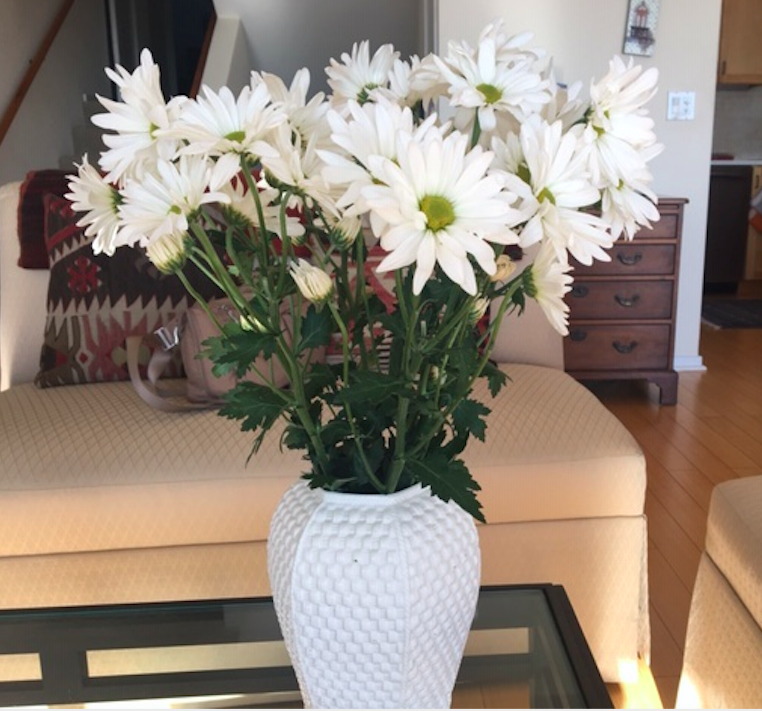 Fifty years and five months ago, Peter and I got married. Although only twelve people attended our wedding, I did wear a white dress. A friend of my mother made an “unrequested” wedding veil for me. Its headband was covered in (not real) daisies.

I remember putting the box containing the veil on the roof of my red VW beetle while I unlocked the car. Then I drove off.

So much for my veil.

Unfortunately, someone found it and turned it in to the little corner grocery store. So I wore it, but it didn’t stop me from loving daisies.

Earlier this week, walking back from the gym, I decided to buy some flowers. Although much of Harvard Square near where we live is mall-ified, the florist shop has been there forever. The owner’s son was not surprised when I asked for daisies.

“You know,” I said to him, “I think I have been buying daisies from you for more than forty years.”   “It’s possible,” he said. “I’ve been here for fifty.”

The outpouring of good wishes from 70/80-Something readers in response to my breast cancer diagnosis has been astonishing. It was difficult for me to share it because I am normally pretty upbeat. And other than being grateful for having had such a wonderful cancer-free life for so long, it’s hard to feel positive about my diagnosis. Your caring thoughts mean so much to me.

I am determined not to let cancer define my life—at least not once we have what we refer to as “a plan.”

Cancer will not define this blog either. There’s too much else to talk about. For one thing, after a gloomy November, the sun has been shining for a week.

November Is the Cruelest Month

November is my least favorite month of the year in spite of the fact that it contains Thanksgiving, my favorite holiday. Gloomy skies are ever-present, and the days get shorter much too fast.

This November was especially tough. A routine mammogram at the beginning of the month looked suspicious to the radiologist who ordered a non-surgical biopsy. My primary care doctor’s call telling me that I was fine turned out to be premature. Although no cancer cells were evident, the radiologists wanted me to have a surgical biopsy because there had been too much change from last year’s mammogram. That surgery a few days later revealed some cancer cells that would have to be removed.

Three weeks later, on the morning of my operation to remove them, the surgeon called to tell me that a further test had found HER2 positive cells that indicate a particularly aggressive form of cancer. That meant she would have to take some lymph nodes to see if the cancer had spread.

Then this past Sunday, she called to tell me that her “we’ll take it out and you’ll be done” is no longer operative and that further treatment would be necessary.

So this November, my diagnosis had gone from “maybe something” to “nothing” to “definitely something” to “even worse”. My further treatment has not been determined yet, but it is likely to be chemotherapy followed by radiation.

Taking care of Peter has been my top priority this past year. So this bump in the road is going to take some adjusting.

I’m not liking my eighties so much.