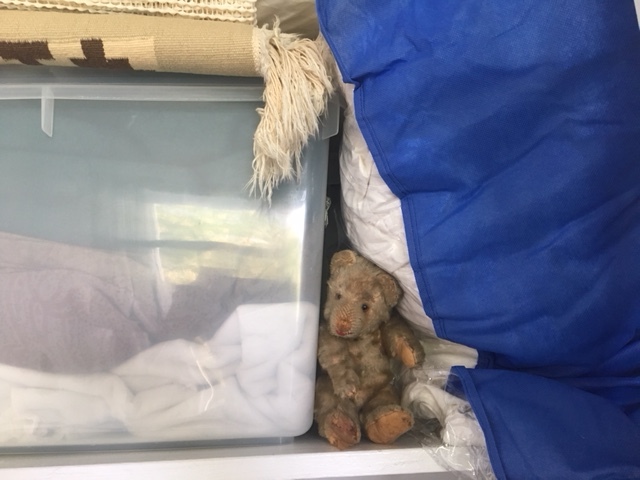 Pictured above is a Steiff teddy bear snuggled between assorted bedding that hasn’t yet found its permanent place in the chaos of our new home in Cambridge.

Teddy is the only possession that Peter has from his childhood in Germany before his family fled the Nazis when he was six years old. Admittedly, he’s a bit shabby, but the places he has been made me think Dr. Seuss best-seller Oh, the Places You’ll Go! about life’s challenges and opportunities.

Teddy has lived with Peter in Germany, Holland, England, New York, Boston, and Washington. On Peter’s sixty-fifth birthday he showed up in New York City at a hotdog stand in Central Park where the hot dog vendor, following a script prepared by our son Seth, claimed that he was a long-lost friend of Peter’s who had been looking for him for years to return Teddy, which, of course, he hadn’t. (I had mailed Teddy to Seth for the hot dog vendor’s participation in the New York City scavenger hunt that he and Jeremy had dreamed up for Peter’s birthday.)

Seuss’ book is intended for new graduates, but it reminds us that adventure lies ahead, even at our age. Teddy looks a little worse for wear, (like us), but he’s ready. So are we…I hope.