In the Blink of an Eye

Our February 13th calendar included a breakfast for new members of American University’s learning in retirement organization, a 1:00 pm session at our continuing care community on how to fall “safely” and our grandson’s 3:00 p.m. middle-school basketball game.

However, the best laid plans…

Walking back to our car after the breakfast, Peter tripped over an uneven sidewalk. He couldn’t move his leg, but we did not know how badly he was hurt. An ambulance took him to the hospital where x-rays showed a broken femur.

Anyone who has spent time in a hospital emergency room in a strange city will understand that this was not fun. But it could have been worse.

Peter was moved to a hospital room after only three hours, possibly a record for short emergency room stays. Unfortunately, they had to wait for Peter’s prescription blood thinner to leave his system before they could operate. That would take a very long two days.

And so the saga began.

If the breakfast had been a lunch and the “how to fall” session had been at breakfast time, we might have had a better day.

I don’t know why we waited so long to invite our grandsons for a sleepover in our retirement community apartment. They had slept at our Cambridge house during many Thanksgiving visits, but with their parents in the house. So this was a first.

We prepared for their visit by expanding our supply of tasty-bad-for-you snacks, but after multiple desserts at dinner, hunger wasn’t an issue. The highlight of the evening (for me) was a series of ping pong games. Although I didn’t win any of them, I held my own. (Too bad none of my fellow oldsters want to practice with me so I can do better next time.)

Our new TV-watching sofa bed had its first overnight occupant (Grady) while his older brother (Leo) slept in the guest room. Peter and I, early risers, were surprised to see Grady already watching live soccer on said TV-watching-sofa bed, allowing me to have a long early-morning cuddle with him. Eventually, we had to wake up his older brother, a 6’2” fourteen-year-old, who probably could have slept all day.

Their mom said they had a super time. So did we.

Yesterday was my 80th birthday.  I have been blessed with good health and good luck.  I am very grateful.

For the start of my ninth decade,  The 70-Something Blog has a new name.  And a new design.  If you subscribe by email, you might not even notice, so I invite you to visit the website and see its new look.

I hope you will continue to follow me on this journey through my eighties.

As one of the youngest members of our continuing-care community (that sounds funny coming from an almost-80-year old), I was surprised by the size of the crowd that showed up on a recent Wednesday afternoon for the first of a series of presentations on how to prepare for dying.

A lawyer specializing in "elder-care” issues spoke at length about how to plan for advanced care. He urged us to document what life-prolonging measures we would want when we became too sick to tell doctors ourselves. He stressed the importance of understanding the regulations. Not only do laws differ from state to state, they change frequently. Staying informed is a challenge. So is keeping your family, your physicians and/or your caregivers up-to-date on your wishes.  Your mind may change as circumstances change.

Be sure to understand your options. One important lesson, for those of us who live close to hospitals in both DC and Maryland, is to try to persuade paramedics to take you to the Maryland hospital in an emergency because Maryland laws are more patient-friendly. Who knew?

We traveled with the kids until they didn’t want to travel with us anymore. We traveled with good friends (mostly by bicycle) as long as we were able to. And then we traveled with small, guided groups tours that allowed us to enjoy  the moments without worrying about the logistics.  These days, even a trip to New York City could be a challenge.

When we left Massachusetts, I took the photo below of our travel bookshelf since we were leaving behind our out-of-date guidebooks.  As we often say these days, “We had our time.” 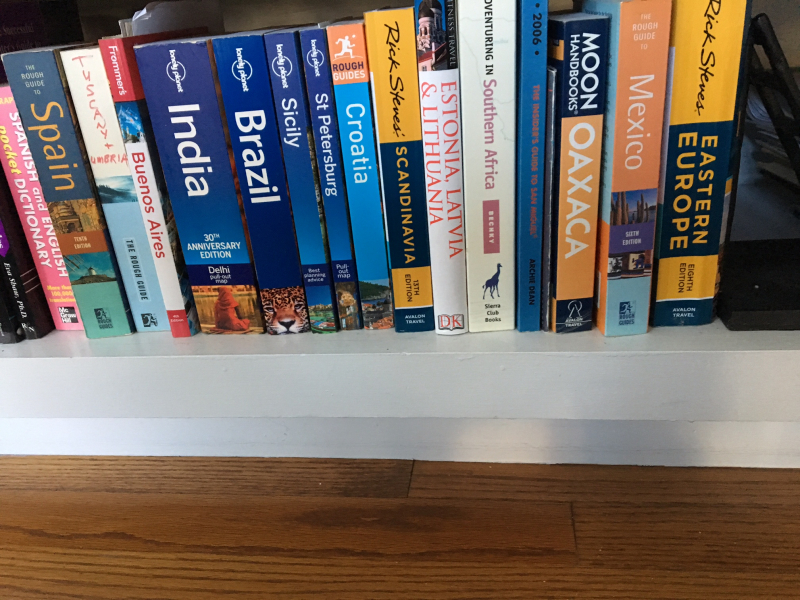 One benefit of our move to our nation’s capital is that many graduates of the Harvard Kennedy School live here. Days after we arrived, a woman approached me in a coffee shop, and said, “I know you.” Sure enough, she graduated thirty years ago and said I looked the same as I did then. (Hah!)

Two more former students have re-surfaced. I remember the first so well because she came directly from college which I consider a mistake. (I believe in working a bit before committing to graduate school.) She turned out to be a star student and she was elected president of the student government. She’s had a distinguished career in education and founded a successful non-profit that she now directs. (So much for my predicting!)

The second was a member of the student-led group we joined in 2002 for a wonderful “educational” trip to Cuba. Cuba was less tourist-ready then when only educational trips were allowed by the US government. We stayed in a hotel near the University of Havana where we were taking a class (in English). I don’t remember the name of the hotel, but I remember that the lights went out when Peter plugged in his CPAP and the sink literally came out of the wall in that student’s room. I would do that trip again in a heartbeat, that is if I were sixty-four, like I was in 2002.

In the past, I have run into graduates of the Kennedy School in places as far away as the Taj Mahal. Thomas Wolfe may have been right when he wrote that you can’t go home again but, if your home was the Kennedy School for thirty-three years, home can come to you.

There’s a lot of talk about legacy when you live in a retirement community. That’s good because if we write our stories well, our kids don’t have to say (as we so often do), “I wish I had asked my parents about “that”.

There was a good turnout for a talk about memoir-writing here last week. It prompted me to think of things in my distant past that hadn’t occurred to me in years, like how my brother and I would get $5.00 checks from each of my mother’s five siblings on our birthdays. The size of those checks would amuse my grandchildren until I told them that in 2018 dollars, each check would be $50.79. Not bad.

And I thought about what I have done as a legacy. My “Letters to Leo and Grady” (our grandchildren) that I have been writing since they were born, this blog, now ten years old, and the long video interview of Peter and me speaking about our lives together, captured by our son Jeremy’s friend about five years ago. There can never be too much.

May I suggest that you write about your life. There’s plenty of help online if you want it. I guarantee that it will be a “best seller” to those who matter to you.

Cosmetic surgery has never been my thing, but when Peter’s doctor recommended that he have his sagging eyelids lifted because they were impairing his vision, I thought it made sense. It was medically recommended and if I got an even more handsome husband in the bargain, that was fine with me.

The outpatient surgery was scheduled for 7:00 a.m. on a Thursday morning. Peter followed the pre-surgery instructions to the letter, including eating pineapple every day for two weeks to limit bruising. (Who knew?)

What followed was the hard part, forty-eight hours on his back with ice packs on his face and time out only for eating, sleeping and bathroom breaks. That’s where Nurse Judy swung into action. Major duties included replacing the bags of frozen peas on top of a gauze bandage every forty-five minutes. There were drops to be put into his eyes and ointment to be put on the stitches four times a day.

The patient also needed calf massages to prevent blot clots. And he needed entertainment. That required setting up an audio book, turning on the radio when the audio book got boring, and switching from news to music upon request. And finally, reading to him when no other form of entertainment worked.

Peter is a non-complainer and a good patient. A week later in the surgeon’s office, the before and after pictures showed a big change. The patient was well on the way to being healed. The purple bruises were fading. And Nurse Judy was relieved to have it over.