Peter and I have just completed our “end-of-life” documents.  They spell out how we want to deal with the inevitable health issues that we will someday face.  Not fun, but important.

We’ve indicated how much we want to know about our medical condition, the kind of care we would like, what aggressive treatments we would choose (or not), and who we would like to have with us in our last moments.  These decisions are difficult and personal, but we know how important it is to make them and to write them down for our loved ones and doctors.

Although it is hard to define exactly what it means, we both believe that our quality of life is very important.  For me, when I can no longer enjoy coffee ice cream, I’ve come to the end of my run…and it will have been a good one.

Sixteen years ago, I discovered that I have a half-sister twenty-one years older than I am.  When my father married my mother in 1930, he was divorced.  In those days, people didn’t talk about divorce, so I never knew about his previous marriage.

In addition to a new sister, I gained a half-nephew, Paul, and a half-niece, Amy, who has two grown children.  It’s hard to make up for lost time, but we’ve tried. My sister, now 98, is doing well.

My niece Amy’s son is 37, the father of two pre-school kids.  Six weeks ago, he was diagnosed with colon cancer that has spread to his stomach.  He is being treated, but it is a terminal disease. The median length of survival is two years.

His parents have come to spend the year in Boston while he is being treated and so we are seeing them as often as we can.  It is unbearably sad.

June suits me. I haven’t stopped loving that it’s “not winter.”  I am just plain happy.  The trees are greener, the sky is bluer and the daylight is longer.

But I do try to avoid the sun during the hottest part of the day. On our walks around the reservoir, I find myself moving back and forth to the shady side of the path. It was very hot the other day so as we climbed the hilly part, I appreciated the momentary respite of the tree-offered shade.

It reminded me of our bicycle trip in France’s Dordogne Valley in 1989, a quarter of a century ago.  There was a heat wave and the Dordogne is hilly.  I welcomed the few seconds of shade each tree provided as we climbed.  When our tour leader passed by in the van, he threw bottles of water for us to pick up at the side of the road. 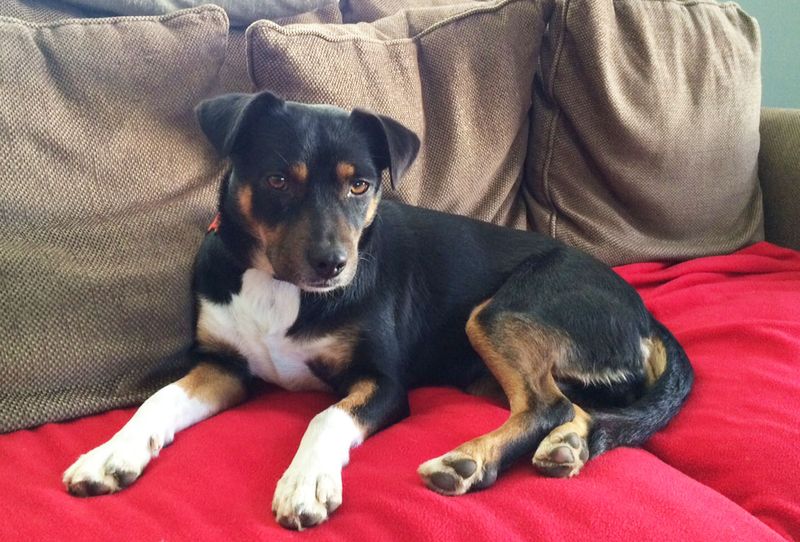 It’s been more than fifty years since a romance of mine has failed.  So I wasn’t prepared for Molly, our kids’ new puppy, to reject me.

If you look at her picture above (which I am including in response to reader requests), you can see why I find her irresistible.  When we met in March, we established a strong bond.  I gave her treats.  I took her for walks.  And as I reported in an earlier blog post, she whined when we left.  I thought our relationship was solid.

But when we visited our kids last weekend, I couldn’t do anything right for Molly.  She wouldn’t come out of her crate for me in the morning.  She ignored me and focused her attention on other dogs and squirrels when we walked.  And when we came home, she only had eyes for her immediate family.

As I was driving home from an all-day meeting, my cell phone rang.  It was my neighbor calling to tell me that Peter had tripped on the sidewalk in front of her house.  He was OK, but bleeding a lot and had refused to let her take him to the hospital.  He told her not to call me, an instruction she was in the middle of disobeying.

Fifteen minutes later, I got home and took my bleeding husband to urgent care at our health plan.  They cleaned him up, closed the deep cut on the bridge of his nose with Steri-strips and sent us home with ice packs and instructions to come back in the morning.

Because Peter takes a blood thinner, the bleeding was excessive, although not life-threatening and now, ten days later, an observer might not immediately assume that he had an unfortunate encounter with a revolving door.

But this is more than a tale of a mis-step.  It is a reminder that life can change in the blink of an eye.  Peter will pay more attention to his walking.  He will get physical therapy to improve his gait.  And I will worry more than ever.

After years of pleading, our grandchildren in Maryland got a "dog gift-certificate" for Xmas.  They chose “Molly” at an animal shelter in early January.  Her soulful eyes won their unanimous affection.  I, a dog lover without a dog, was thrilled for them and couldn’t wait to meet her.

Instead of sending us videos of our human grandchildren, Katrina and Jeremy sent us videos of Molly.  Except for eating one of Jeremy’s shoes, she made an easy transition into the family, but particularly bonded with the only other female in the house--Katrina.  That creates an ongoing problem because each time Katrina leaves Molly goes to the window and whines.

When Peter and I met her on a March visit, Molly and I bonded too.  She joined us when Jeremy drove us to the airport, and he reported that she whined at the window when we left the car.

According to Jeremy, when Molly heard my voice on speakerphone the other day, she licked it.

Little known fact: The Gene Kelly Dance School was a fifteen-minute walk from the house in Pittsburgh, Pennsylvania where I grew up.  I failed my tap dancing class there at age ten.

By then, Kelly was no longer teaching, but in 1951, he starred in one of my all-time-favorite movies, An American in Paris.  So I couldn’t resist seeing the film re-born as a Broadway musical when we were in New York last week.  Our seats weren’t the best, but it didn’t matter.

Two principal dancers of the New York City Ballet played the Gene Kelly and Leslie Caron roles.  It was a magnificent production and Act II’s stunning dance scene moved me to tears.

We also saw a very different musical.  Fun Home is based on a memoir about a dysfunctional family that runs a funeral home.  The teen-age daughter is discovering that she is a lesbian. The father is a closet homosexual.  His long-suffering wife is, well, long-suffering.

Brilliantly produced as theater in the round, profound and with impressive performances, even our last-row seats were just fine.

In New York, almost on a whim because of our son’s birthday, we saw some of the best theater we’ve ever seen.

When Seth invited us to his birthday party in New York City last weekend, we couldn’t refuse, even though traveling is not as easy as it used to be.  He arranged for us to stay with neighbors of his in Jackson Heights, Queens on Friday night. Friends would host us in Manhattan Saturday night.

This is how we traveled:

Saturday: Walk to subway to Manhattan.  Drop luggage at friends.  Subway to Broadway theater.  Subway back to friends.

Sunday: Cab to Penn Station.  Walk to nearby hotel.  Persuade hotel to store our luggage even though we didn’t stay there. Walk to theater on Broadway. Subway back to hotel to get luggage in torrential downpour.  Walk a few blocks to bus from hotel. Still raining.  Bus late. Terrible traffic leaving New York City.  Home at 1:00 a.m.

Monday:  Recovered.  Congratulated ourselves on managing the big city by subway, amidst huge crowds, in hot weather and in torrential rain.