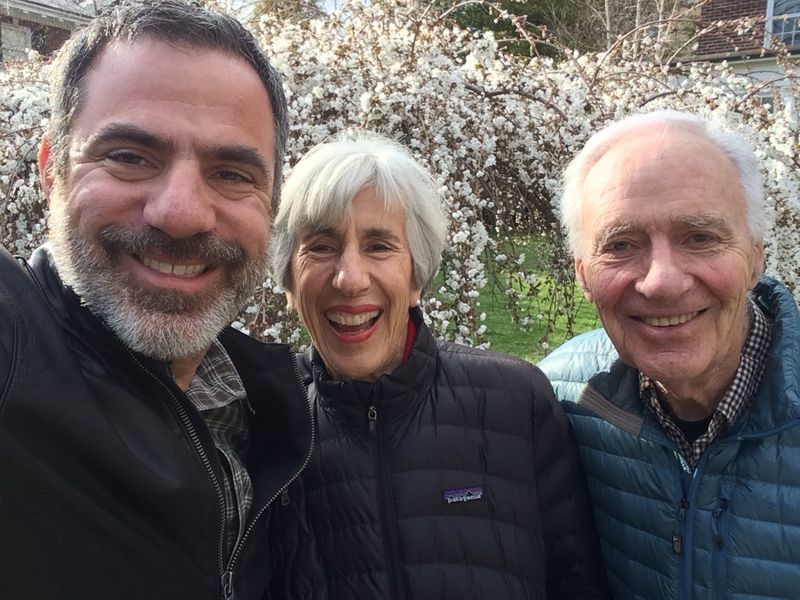 I have 144 friends on Facebook.  (I just checked.)  I have no idea where they all came from.  I only know that I have never asked anyone to be my friend, so they must have asked me.  Who knew?

Although some of my “friends” post every day, I rarely do.  However, on Sunday, when Peter and Seth (home for a one-day visit) and I went for a neighborhood walk, we passed  a gorgeous blooming tree (see above), and Seth took a selfie. I thought it was Facebook-worthy. I posted it at 7:30 pm.

Before I knew it, there were 53 “likes” and 9 comments.  Since Seth has 1609 friends (I just checked), I thought most likes and comments would be his, but 21 likes and 5 comments were my friends.  Like I said, who knew?

My politics of immigration class was randomly divided into Republicans and Democrats last week.  Each team was assigned to write the immigration portion of its party’s 2016 platform.

Because I was assigned to the party that does not agree with my views on immigration, I was forced to think like my adversaries. It’s easier to talk with those who share your values, but I try to keep an open mind when talking with people who don’t share mine.

Our team has spent hours carving out our platform.  On the last day of class, we will have to defend it to our classmates.

I think I will be a better person for having walked in the shoes of people I don’t agree with.  Maybe Congress should try it.

I’ve never been a big TV watcher.  So a few years ago when the first episode of a new series called Homeland was so violent, I gave up on it.  But, convinced by our daughter-in-law Katrina that the brutality in the first episode should not keep us from watching such a good show, we gave it a second try last month.

And now Homeland has taken over my life.

Which is a problem.  First, the show is now in its fifth season and I can only bear to watch one episode at a time.  Second, if I watch it right before bed, I can't fall asleep.  So, it’s going to take forever to get up to date.

The other night I recommended it to my brother who insisted that nothing could be better than Game of Thrones which is really violent.

My love affair with coffee ice cream continues.  With a gun to my head, I would choose cinnamon or coconut.  But our freezer always has two quarts of coffee just in case the local Trader Joe’s runs out.

I don’t eat it every night since ice cream is not a healthy choice (although I plan to start daily consumption on my 80th birthday). But because I crave something sweet at the end of dinner, I have a couple of cookies on non-ice cream nights.

My favorite is a gluten-free oatmeal-raisin cookie that I buy from our trainer Kathy’s mother-in-law.  The trouble is that they are only sold in stores in New Hampshire, and I only get them once every other month when Kathy comes to our house.

I freeze a bunch and take out two at a time.  I microwave them for thirty seconds.  I eat them slowly, savoring each chewy bite.  I finished my current supply yesterday.

I told Peter they are “the coffee ice cream of cookies.”

On Sunday, the first real spring day of this dismal season, I couldn’t wait to clean up the yard.  I picked up branches, swept the patio and cut back the tall decorative grasses along our driveway.  After pulling away at their wheat-like stems, I noticed blood from several cuts on my hands. Like paper cuts, they really hurt.

Lesson: With my now thinner skin, I need gardening gloves.

Sunday also was one of the rare occasions when Peter actually got mad at me for my helpful suggestions (aka “nagging”). I responded by pouting for the rest of the day. Like a paper cut, it really hurt.

Lesson:  No gloves can fix that kind of thin skin.

Let's Talk About It

70% of Americans say they prefer to die at home.  Yet 70% of Americans die in hospitals, nursing homes or long-term care facilities.  There’s something wrong with this picture.

We may never get it just right, but people are beginning to talk about how we might come closer to meeting end-of-life wishes for all ages.

Which brings me to The Conversation Project.

Founded by Pulitzer Prize-winning journalist Ellen Goodman, The Conversation Project (TCP) is a national campaign dedicated to helping people talk about their wishes for end-of-life care.  TCP doesn’t have a view about the decisions that people should make.  It just wants us to talk about them and decide what works for us while we can.

The Conversation Project offers a “Starter Kit” to help us initiate this discussion with our loved ones.  It’s like seeing a lawyer to prepare your will.  Not fun, but necessary.

Peter and I downloaded the Starter Kit, and talked.  We thought we were already clear about our wishes, and it turns out that we had thought of most things in earlier conversations.  But not all.

I urge you to visit TCP’s website at http://theconversationproject.org/ and start your own conversation.

It was my Sunday night ritual for years.  I would settle into the family room sofa to watch TV with Peter and the kids.  And I would manicure my nails,  usually with a fire engine red polish.  If I was ambitious, I’d do a French manicure.

When a friend asked me where I had my nails done, I loved telling her that my manicurist was me.

On our way to dinner with that very friend the other night, I was bemoaning the state of my nails.  Maybe it’s my celiac disease that robbed them of their strength.  Or maybe just being older.  My nails are always breaking and they are full of ridges. I keep them well filed and hope nobody notices.

In that same conversation, I was bemoaning the state of my hair.  It used to be so thick that my hairdresser had to use a thinning shears.  No more.

So, my beautifully manicured nails, and my thick tresses are gone.

As is my youth.

Learning from Our Kids

Jeremy and I were driving back to his home in Maryland on a Friday that he was off from work.  He was about to make his usual left turn off a main street when he noticed the “no left turn at this intersection” sign.  He drove on, turning left into a shopping center in the next block.

Immediately, flashing blue lights appeared behind us.  “Uh-Oh, maybe I couldn’t do that,” said Jeremy who at forty-three had never received a traffic ticket.

When the cop asked for his license and registration, Jeremy responded quickly and respectfully, and made no excuses. The policeman wrote up the ticket and handed it to Jeremy, recommending that should Jeremy decide to appeal, he should not waive the officer’s appearance in court.  “If I am there, I behave differently when the ticket-receiver has been polite and respectful,” he said.

I sat quietly, proud of my grown son.  I was thinking, “If it had been me, I probably would have explained that I am normally working at that time, that I would never have knowingly violated the law with a police car right behind me, etc".

Sometimes it's best to keep your mouth shut.

My 11th grade U.S. history book was grayish-green.  It was big, and it was heavy and I have forgotten 99% of its contents.

But last week changed that.   We were in Virginia because, in a class Peter and I took about Thomas Jefferson last semester, we were so impressed by this Renaissance man that we decided to visit Monticello.

Our five-day tour included visits to the homes of Presidents Madison and Monroe who were Jefferson’s neighbors and friends. Our mornings consisted of lectures; our afternoons of visits to Montpelier, Ash Lawn-Highland and Monticello.  Each place was lovingly restored, but Jefferson’s Monticello won our best-in-show award.

Jefferson asked that his tombstone credit him only for the University of Virginia, The Virginia Statute for Religious Freedom and The Declaration of Independence—no mention of his presidency.  Monroe, who served as Secretary of State and Secretary of War at the same time under Madison, never forgot that he was a soldier first and was referred to as Colonel Monroe until his death.  Madison, our shortest president, wrote the model for the Constitution and the Bill of Rights.

Our next history visit will be to John Adam’s home.  Although it’s only thirty minutes away, we’ve never been there.  So little time, so much history to re-learn.