The Mouths of Babes

We’ve been fortunate to see our grandchildren twice in the last few weeks, first in New York City and then in Maryland.

In New York, we had a conversation about trans-gender issues with them.  You can be sure I didn’t bring it up.  When I was their age, I hadn’t even heard the word “trans-gender”, and I thought the only meaning of "gay" was happy.

When I played “Jumpin Monkeys” against eight-year-old Grady in Maryland two weeks later, he explained his strategy as if he were planning a mission to Mars.  And when eleven-year-old Leo talked about how he was deciding which computer to buy with his savings, it sounded like he was working for Consumer Reports.

But the most astonishing words were Leo's on a long drive back from dinner at friends.   You have to understand that Peter and I know some very accomplished people, many of whom are eager to talk about what they do.   And you don’t expect children to put themselves in your shoes.  So imagine my surprise and delight when Leo asked,

“Grammy, what TV series do you and Gramps like to watch?”

The Only Constant Is Change

My father died when my mother was sixty-nine years old.  She lived seventeen years longer, missing him every minute.  So when Peter turned eighty-five earlier this month, among the things I was grateful for was that at age seventy-seven, I still have him.

Throughout our marriage, I have seen my handsome husband as the man who could do anything.  And did.   But (no surprise) things change.  And adjustments have to be made. We haven’t been able to take the rigorous biking vacations we used to take since he was diagnosed with Parkinson’s disease eight years ago.  Inveterate on-our-own travelers, we now go on guided tours.  (At least we still can go!)

One of the hardest things for us both is that I am doing more of “his” tasks, like driving, doing chores that require fine finger dexterity, etc.  And I find that I have to remind him of things more often than both of us would prefer. Sometimes I fear that I sound like his mother.  It’s not what I would wish for.

In a moment now regretted, one of us (who I won’t name) couldn’t open the frozen shut storm door to get into our house during the worst of the winter cold. The back door was blocked by six feet of snow.  Rather than asking a neighbor for some boiling water to free the door, this person forced the handle and broke it.

It is too painful to describe how hard the person I won’t name worked to install that handle. We thought we had it right until I went out to get the paper early the next morning (with no coat, I might add) and the door wouldn’t open when I tried to come back in.  Fortunately, Peter heard me banging on the door over the loud TV in the basement where he was exercising.

Bottom line—We have asked our neighbors to recommend a handyman.  More important, we are beginning to accept the fact that we need to get help for some things we always did ourselves.

We’ve had the snowiest winter in Boston's history and it's not over yet.

But things seemed to be getting better when on March 9th our “undelivered” Sunday newspapers from February 15th emerged from a snow bank next to our sidewalk.

Recently, the temperature climbed above freezing for the first time in weeks.  Although our street is still only one-lane wide, the mounds of snow next to the curb are lower and our sidewalks are passable. A friend reported  he just realized that the three huge mounds of snow he walks by regularly actually contained three cars, now partially visible.

The days are getting longer, the temperatures will rise and spring will come.  Somewhere under all that snow our purple and yellow crocuses are hoping to see daylight. 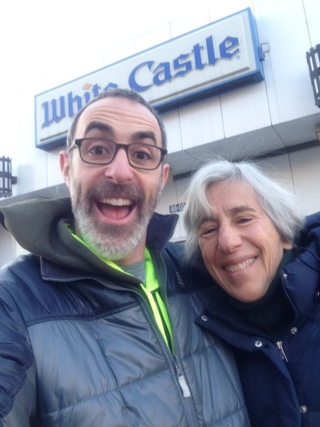 Jeremy, our younger son and father of our two grandsons, successfully completed his eat-an-apple-a-day-for-a-1000-days marathon last October.   Never content to be challenge-free, he decided to eat in the 100 largest restaurant/fast-food chains in the U.S. in1000 days.  No one agreed to join him, but a friend’s wife did pledge not to eat in any of those restaurants for 1000 days.

His parents rolled their eyes with that “here we go again” look.  At least apples are healthy.

On the Saturday of our NYC birthday celebration for Peter, Jeremy was in the living room of our Air bnb apartment when I woke up. He couldn’t wait to tell me that he had discovered a restaurant on his list that was a three-minute walk away.

That’s why I found myself, face unwashed, teeth unbrushed, in a White Castle restaurant at 7:00 a.m.  The restaurant had been open all night.  No one was there but us and the cook/order-taker.  Jeremy had a bacon, egg and cheese slider with a side of hash browns and a cherry coke.  Needless to say, I had nothing.  I think the total bill was $4.79.

What we do for our children! 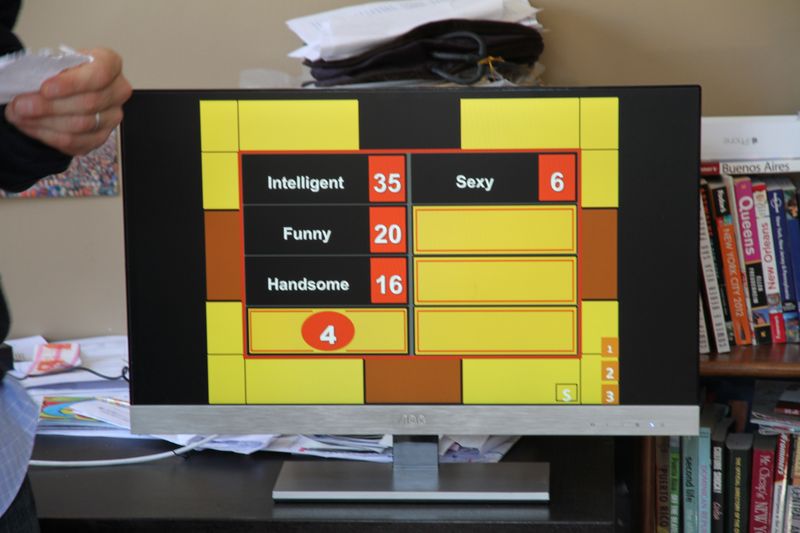 The Kugel family met in New York City last weekend to celebrate Peter’s 85th birthday.  Although Peter doesn’t like being the center of attention, he had no choice.

I took care of theater tickets and dinner arrangements, but Seth and Jeremy created the Peter Kugel Family Feud, an experience we will talk about for years. They sent  multiple-choice questionnaires to a hundred of their friends and ours. Questions included, “What part of The New York Times does Peter turn to first?”  “If Peter were an animal, what would he be?”   “What trait have Seth and Jeremy inherited most from Peter?”  Somehow they got the real Family Feud TV show board on Seth’s large computer monitor.  It was completely true-to-life, with Jeremy starring as host Richard Dawson.

We had a Maryland team and a Massachusetts team, and the competition was fierce. Here’s a 27-second clip:   https://www.youtube.com/watch?v=Gv_D5ChcBh8&feature=youtu.be

No gift could have better expressed the love of our two sons for their amazing father.

Parkinson's Disease and Us

It’s almost eight years since Peter was diagnosed with Parkinson’s disease.  Because of his excellent neurologist and (I believe) his compulsive exercise regimen, he has done very well. Although he has had to give up biking and has some balance and other challenges, we’ve changed very little in our lives other than to make some adjustments that most older folks make.  (You can read a recent good opinion piece on Parkinson’s disease here. )

One evening last week, I picked up a book (Making the Connection between Brain and Behavior—Coping with Parkinson’s Disease) that has been sitting in our study.  The chapter titles describe behaviors associated with the disease, e.g. Depression, Anxiety, Apathy, Dementia, Hallucinations, Delusions, and Confusion.

Had I read that book upon Peter’s diagnosis, I would have lived in constant dread, watching for each of those symptoms.  Even without reading the book, we worried that we didn’t have more than a year or two of good time left together.  Had I been the patient reading the book, I might have wanted to give up on life altogether.

But Peter’s case hasn’t gone that way.  That’s not to say that there won’t be some tough times ahead, but we have had eight terrific post-diagnosis-years and are looking forward to more.

Good attitude, good doctor, hard work—for us it has paid off.

The other day I was interviewed by an 80-something Professor of Management Emerita (I love that word) at MIT who’s involved in a research study on retirement.  (I am struck by the number of academics who propose research projects on retirement just when they are considering retiring.  But I digress...)

The questions she asked me were on point.  Did I retire because I was tired of my job?  No. Was I pushed out? No.  Why did I leave?  Because I knew I would never want to leave a job I loved so much and it would never be “easy” to leave.  Plus, I was 75.  How did I manage the transition?  Not so well.  Am I happy with what I am doing now? Yes, I have a full life with a variety of satisfying activities.

And then I answered a question she didn’t ask.  As happy as I am, as satisfying as the things I am doing are, nothing has replaced the joy of working for thirty-three years for an organization whose mission resonated so completely with me.

The Wisdom of Oliver Sacks

End-of-life issues have been much present in the media (and in this blog) lately.  Now, Oliver Sacks, a professor of neurology at the New York University School of Medicine chimes in with his thoughts about his end-stage cancer prognosis.

Perhaps best known for The Man Who Mistook His Wife for a Hat, a collection of case histories of neurological disease, Sacks, 81, learned a few weeks ago that he has multiple metastases in his liver.

He writes in The New York Times, “I am now face to face with dying.  But I am not finished with living.” Sacks has an autobiography coming out in the spring and several “almost finished” books to attend to.  He has plans about what he will and will not do to live life most fully in the time he has left.

A life well-lived and not yet over…