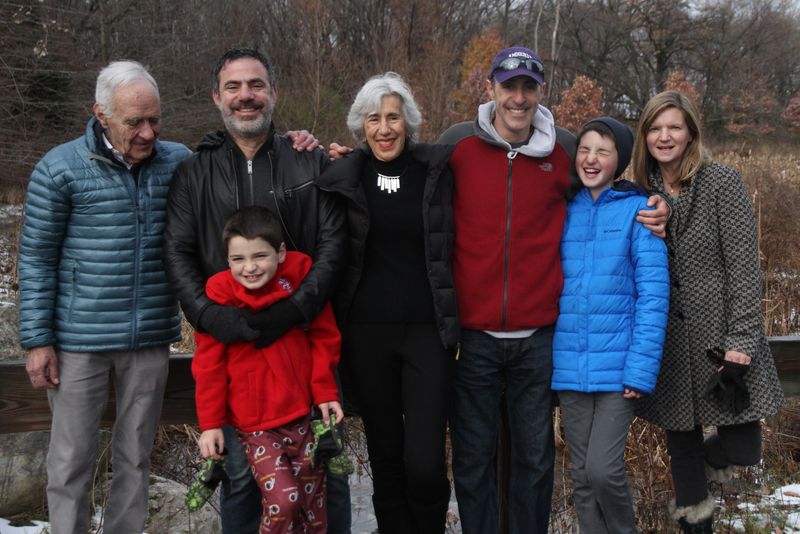 The sun shone on our Thanksgiving.  Despite the dire weather warnings everyone got here on Wednesday, only slightly delayed by the snow.  The most efficient travelers were at our door by 9:25 in the morning, having left Maryland at 1:50 a.m. (including the Burger King breakfast stop). We had an extra guest, Eric, who because of our full house, had to sleep on an air mattress between the elliptical trainer and the bicycle in our basement “exercise” room.  He was a very cool guest.

Once the turkey was in the oven, we did our traditional Thanksgiving walk around the nearby reservoir with the annual family picture, taken by Eric, at the usual spot after the traditional consumption of a dozen Dunkin’ Donuts, that required a short detour off the path by Jeremy and grandsons.

There were no surprises at our Thanksgiving dinner.  I don’t dare to change the menu. We had a very long “grateful jar” session between dinner and dessert—funny and loving comments written by the most important people in my life.

I remember cherishing Thanksgiving last year, hoping and praying that we could do it again.  Having everyone together is a tradition for which we are very thankful—a tradition we can’t take for granted any more.

We've Had Our Time

When cyclists whoosh past us on our walks, Peter and I miss our twenty-five years of bicycling vacations. When we shiver in the late fall cold, we envy the young people outdoors in T-shirts.  When we clumsily tap text messages while kids’ thumbs fly, we feel ancient.

Then we remind ourselves that we’ve had our time.

The other day, we were discussing our health challenges (which thankfully are manageable) and whether or not we should make an appointment to meet our new primary care doctor so that she will know us as fit, active, non-complaining patients before we need her.

Even though we’ve had our time, we’d like her to help us have a little more.

Our friend Ruth lost two friends within ten days recently, one of brain cancer, one of lung cancer.  She was understandably sad because both had been colleagues and close friends.  They also were about ten years younger than she is.

Losing friends is a given at our age, but that doesn’t make it easy. In my late thirties, three of my friends died, two of lung cancer (though neither smoked) and one of liver failure while she was waiting for a transplant.  But since then, no good friend of mine has passed away.  Of course, I know this will change.

Neither of Ruth’s friends was “ready,” unlike my Aunt Ruth, who now almost 103, told me two years ago that she would like to “not wake up soon.”  Since we visited her in June, she no longer leaves her bedroom.  She rarely gets out of bed at all.  Fortunately, she has wonderful friends generations younger than she is who visit her often.

We called to check on Aunt Ruth because Buffalo was having record snowfall.  She’s fine.

She wishes she wasn’t.

Dinner at Dan and Gaby's

At the age of 70-something, we can’t help but think about what we might have done differently with our lives--if we only knew then what we know now…

There is little I would change.  I married the right man and although I wish I had had more children, I think the two we have are quite amazing.  I’ve had a rich professional life and good health.  No complaints.

But I think I made a major blunder by never living in another country.  We have been lucky enough to travel extensively, but that’s not the same.  Our boys have both lived abroad, Jeremy for a year in Chile and Seth, in both Kenya and Brazil, and their lives are richer as a result.

I thought about this the other night when we had dinner at the home of one of my former colleagues and favorite professors.  He and his wife are Venezuelan.   They met when they were in graduate school in Boulder Colorado, married and now have two daughters, around twelve and nine.  Of course Dan and his wife are multilingual, as are their children. At home, the girls speak Spanish to their mother and French to their father.  So French is their third language.  One of the girls is also learning Russian.

For dinner, Dan and his wife Gaby prepared a Venezuelan feast for Peter and me.  We loved it.  And we were so pleased with their homemade arepas (made from white corn flour and therefore naturally gluten-free) that they gave us a bag of flour to take home so we could make them ourselves.

It was a bit like a visit to Venezuela—but not as good as living there.

Our daughter-in-law Katrina LOVES Paris, so when she was offered an all-expenses-paid three-day trip there to join a friend celebrating her fortieth birthday, she had to go.  She hesitated to leave the kids, but Jeremy urged her to go (especially since that got him off the hook for taking her there himself).

Jeremy was happy to be the full time parent when he wasn’t working, but they needed someone to help get the kids to and from the bus stop on school days.  Who better than his brother, Uncle Seth?  Because he is on book leave from his job, Seth agreed to do the bus runs and be available for any daytime emergencies.  The kids adore their uncle.

On the first day, Uncle Seth helped the kids make their lunches and drove them to the bus stop long after Jeremy had left for work.  There were other kids at the stop, so Seth left.  Big mistake.  You are either supposed to stay with your children at the bus stop or ask another parent to watch them.  Seth explained that when he noticed that there were more kids than cars, it seemed that others had dropped off kids and left.  What he didn’t think about is that many kids live within walking distance from the bus stop.  First mistake.  Would there be others?

That turned out to be the only blunder I heard about.  The kids admitted they got some extra candy, but didn’t mention any other extra privileges or problems while under Uncle Seth’s care.

For me, my boys having quality brotherly time together warmed my heart.  Jeremy reported that Uncle Seth was “awesome” at taking care of his nephews.  For Seth, it was a taste of suburban life, so different than his New York City existence.  From all reports, he had a great time too.

The boys sounded pretty excited when we talked to them on their way to the airport to pick up their mother.  As for me, I was just relieved that all had gone well.

I’ve got my annual case of the November blues.  Dark skies by five o’clock, falling temperatures, and bare trees all contribute to my feeling of malaise. It’s not that I am unhappy about anything specific.

I’m as busy as ever.  I like everything I do. In two weeks the whole family will be here for my favorite holiday. In six weeks, the days will  start getting longer again.

But I still have the November blues.

If it is Sunday, the chez Kugel default is to have a leisurely breakfast, turn on classical music, and stretch out on the sofa with the newspapers. A child or friend may call to catch up.  We may have social plans later in the day. But we are happy just to “be”.

However, when we do venture out, Peter and I have a great time together and wonder why we don’t do it more often.

Take last Sunday.  We had an extra hour because the time changed, but it was a horrific day outside—snow/sleet/freezing rain, unseasonably cold, dark and gloomy.  Our options were stay home and be miserable or go out and be miserable.  We decided to go out.

We headed to the Goya exhibit at Boston’s Museum of Fine Arts.  We had to wait a few minutes in the snow/sleet/freezing rain for the museum to open.  Just as I was convincing myself that we were crazy to have come, the doors opened and we forgot the bad weather.

We loved the exhibit.  And we ran into friends who invited us to join them and friends of theirs for lunch in the great hall of the museum.

When we drove home, the weather was still horrible. But the newspaper was waiting, the music was waiting, and we had had a lovely day.

We should venture out more often.

More than forty years ago Peter interviewed for a teaching position with the chairman of Boston College’s Computer Science Department, Jack Neuhauser. That interview led to more than thirty wonderful years of teaching at BC. And some lasting friendships.

We hadn’t seen his former boss (now President of St. Michael’s College in Burlington, Vermont) in years, and since we were having other BC friends for dinner, we asked him to join us.  We were delighted when he accepted.

Catching up on kids and grandkids and life in general was great.  But the most memorable moment for me was when Jack recalled his phone conversation with Peter setting up that job interview so many years ago.  Jack asked Peter, “Do you want me to tell you how to get to my office?”  Peter replied, “If I can’t find it on my own, you shouldn’t hire me.”

Thus began a great friendship, a great career, and some wonderful memories.

The Shot that Fell Short

Years ago, Peter and I participated in a study of a shingles vaccine.  Because it was a double-blind study, we didn’t know whether we had been given the real vaccine or a placebo.  When it was found effective, the study directors contacted those of us who had gotten the placebo and invited us to be the first to get the vaccine.  Peter had gotten the real stuff; I had to get inoculated.

So when I noticed a painful bite-like rash near my scalp after going to the movies a few weeks ago, I decided that there had been some spiders in the movie theater.  A few days later, because the rash was spreading and more painful, I made an appointment with my dermatologist.  Then a friend told me that she thought the rash looked like shingles.  “Of course not,” I said.  “I got the vaccine.”

By then, I was feeling pretty awful and since my dermatologist appointment was a couple of days away, I went to my primary care doctor who confirmed my friend’s suspicion.

Because the outbreak was close to my eye, I had to see an opthamologist immediately because ocular shingles can damage your eyes.  Fortunately, although my eye was nearly swollen shut, my shingles had not spread that far.

Now, three weeks later, I am much better.  My rash is less angry and I have finished the anti-viral medication that made me feel worse, not better. My head still aches, but not so badly.

Bottom line:  Get the vaccine, but remember that not all spider bites are from spiders.