Home Archives Profile Subscribe
Keep Your Eye Upon the Doughnut
"Who's the Old Lady?" and Other Weekend Quotes

Weekend with a Zip Dog and a Fire Pit 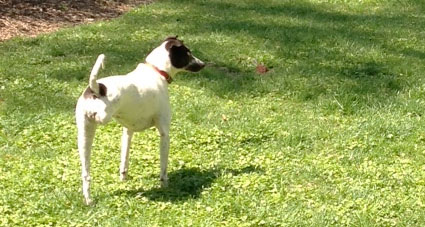 Josie (pictured above) is a three-legged mixed breed belonging to our kids’ next door neighbors.  No one knows how Josie lost her leg because she was that way when she was adopted.

Our kids often borrow Josie for their neighborhood walk.  Jeremy calls her their “Zip-dog.”  And when the grandparents visit, as we did last weekend, we go along.

What’s amazing about Josie is that she doesn’t seem to know (or care) that she is different from other dogs.  She runs up and down stairs and around her yard with boundless energy.  She even climbed a ladder once, and there is a video to prove it.

1)    Being greeted at the school bus stop with a huge hug and a “Hi Grammy and Gramps!” from grandson Leo’s friend Marcus.  (Leo and his brother Grady hugged us too, but that’s expected.)

2)    Two flag-football games, a soccer game and a baseball game.

However, perhaps the best moments of all were Sunday night’s cookout, followed by three generations sitting around the fire pit that Jeremy built on one side of the house, roasting marshmallows for s’mores and singing around a blazing fire.

It doesn’t get any better than that.