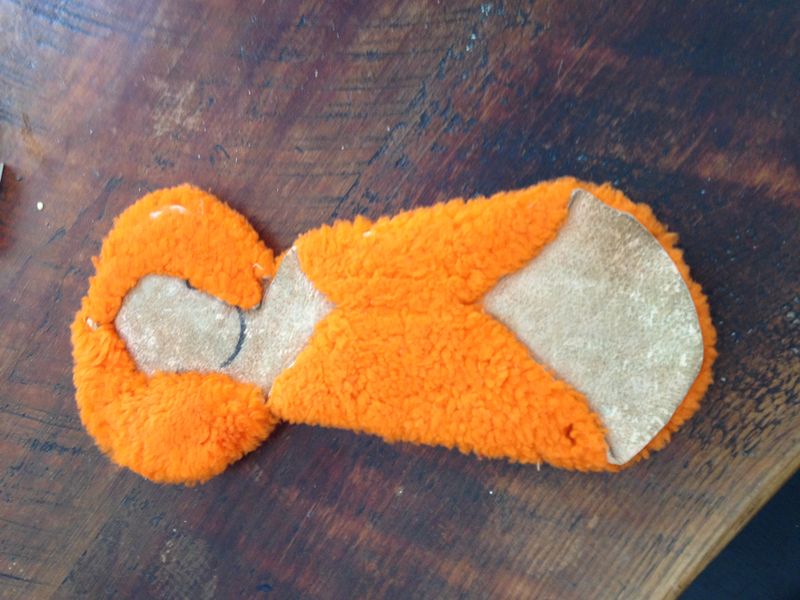 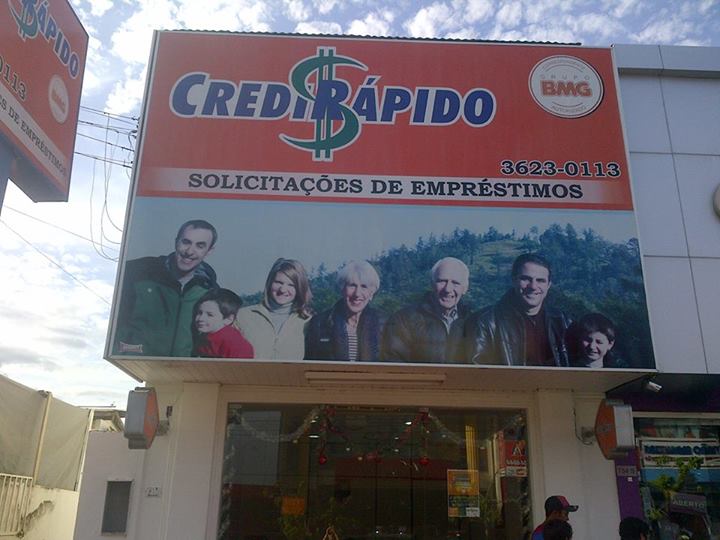 The picture above was taken in Roraima, Brazil.  It shows an advertisement for CrediRapido, a loan company.  Although our son Seth spends a lot of time in Brazil, he has never been to Roraima.  And neither has anyone else in the picture.

Seth’s Brazilian friend Tammy was visiting her parents who live there last week, recognized Seth in the advertisement, and emailed him the photo.  Seth posted it on Facebook with the following comment:  “If you're ever in Roraima, Brazil and need a loan, this company's spokesfamily seems incredibly trustworthy (not to mention good looking). Photo credit and sharp eye - Tammy Arnaud.”

The photo in the ad was taken on our annual pre-Thanksgiving Dinner walk two years ago.  Somebody, somewhere, somehow snatched it from the Internet, having decided that we were a wholesome family, perfect for an advertisement.  The irony is that Brazil is famous for its beautiful models, yet someone chose us!  Of course, the price was right.

I doubt that it makes a difference, but they removed the football Peter was carrying, put leaves on the trees in the background and flipped the picture left to right.  I am sure the perpetrators assumed that we would never see it.

Stay tuned to 70-Something.com for further developments.  My post-retirement career as a model might be underway.

I’ll go to see any movie with Judi Dench.  Last year she was superb in “The Best Exotic Marigold Hotel.”  This year it’s “Philomena”, based on a true story about an elderly Irishwoman’s search for her son. The nuns who took Philomena in as a pregnant teenager and made her work in their laundry to pay her “debt” to them, allowed an American couple to adopt her son when he was a toddler.

On what would have been his fiftieth birthday, Philomena begins to search for him.  It’s a lovely movie and a sure award winner.

Judi Dench is 79.  The camera is on her face during much of the one-hour, thirty-four minute movie.  It is a wonderfully expressive face.  And it is very wrinkled.

The poster ad for the movie has air-brushed her wrinkles out. But they are front and center in the movie itself, and Philomena’s face is beautiful.

It may be time to sell your stock in the wrinkle-cream industry.

Although the calendar says that winter isn't here yet, it has been bitter cold and we have had way too much snow for mid-December.  Combined with the short days, it's a recipe for my being miserable.  But, instead, I’m pretty darn happy.

Two months ago, newly retired and with some ideas, but no plan, I was pretty darn unhappy.  My job had been my identity. When I left it, I wasn’t sure where to start the process of reinventing myself.   Thanks to a combination of good friends, good energy and good luck, I am all set.

I have made a mix of commitments.  An inner city school where I will be helping the students with college applications, some pro bono consulting for non-profits and studying at a center for learning in retirement should be enough to keep me out of trouble.

Everyone warned me that it would take a year to adjust to not working.  Let’s put it this way—when I was in school my papers were always handed in early.

Because I have retired, I agreed with some reluctance to be on a Kennedy School committee that I had served on for years.  I am a “volunteer,” so I can change my mind if I don’t like it (although I doubt that I would do that).  After thirty-three years, the school is part of my “DNA” and I will never stop caring.

On Wednesday, I attended a luncheon meeting to launch this year’s committee.  There were thirty-some of my former colleagues there, including some I didn’t know.

The committee chair asked everyone in the room to introduce themselves and state their affiliation at the school.  When it was my turn I said, “Judy Kugel, retired.”  The crowd burst into spontaneous applause.

It’s nice to be a celebrity.

Since I retired three months ago, I’ve been in de-accessing mode.  I’ve never been a pack rat, but because I worked long hours, I rarely found the time to get rid of stuff.

Which brings me to my bathrobe wardrobe.  My long, black, rolls-up-to-nothing robe is great for travel.  My long pale pink cotton robe looks good with my summer tan.  My short lavender terry cloth robe with a cheery white flower print is perfect for the transitional seasons, and generally I wear it from early fall through Thanksgiving.

But come the New England winter, I haul out my long, bright-red fleece robe.  That’s what I did Wednesday when the cold spell sweeping the nation reached New England.

The de-accessing of bathrobes is not on my agenda.

There is an interview with me by blogger Miranda Daniloff at http://www.beyondworklifebalance.com/

I spend a lot of time lying down.  In addition to sleeping, I stretch and lift weights on the floor, and I meditate lying down.

So I was not prepared for the dizziness I felt when I stood up after my morning stretches a few Fridays ago.  I grabbed a nearby doorknob to save myself from falling and thought that perhaps I had gotten up too fast.   Later that day, I felt dizzy after meditating and after getting up from exercising on my foam roller.  That’s when I called the doctor who told me to come right in.  Although my blood pressure was wacky and I was dehydrated, he found nothing life-threatening.  So I promised to drink a ton of water, and went home.

Although things got somewhat better, and I was managing by getting up slowly, the on-and-off dizziness continued.  So on Thursday I saw an ear, nose and throat specialist who ruled out an inner ear problem with a few non-invasive tests.

However, she reminded me that although I am in super shape in general, there are some inevitable changes with age that affect the way blood moves through the body.  Because I have very low blood pressure (which isn’t so good as one ages), I need to increase my blood volume so that it flows to my head more easily when I get up.  The remedy is hydrate, hydrate, hydrate.

I thought I drank a lot of water, but I will drink more.

And so should you.

The pre-Thanksgiving storm forecast for the eastern seaboard had me imagining the worst.  Our kids normally beat the traffic by leaving at 2:00 a.m. Wednesday morning, driving eight hours straight, and arriving on our doorstep by 10:00 a.m.  As a certified worrier, I pictured fog, multi-car pile-ups and worse.

But, thanks to Glympse, an app on my smartphone, I was able to see where they were and how fast they were moving at any moment. From the time I woke up until they walked in the door, kids still in their p.j.’s and parents upbeat, I checked on them periodically.  Seeing that arrow moving along the map on my cell phone was all I needed to know that they were safe.

I couldn’t help but think about how it had been for my mother.  When I was little, my father was a salesman, on the road from Monday to Friday.  My mother used to say that if she opened the front door on Friday night at 5:00 p.m., Dad was probably pulling into our driveway.  If not, she wouldn’t have a clue about where he was.

The Thanksgiving Dinner That Almost Wasn't

I’m a compulsive list-keeper and I had my pre-Thanksgiving Day “to-do’s” all checked off.  My day-of-Thanksgiving list also was looking good.

Well-worn page in a Julia Child cookbook, documenting the size and cooking time of all past Thanksgiving turkeys:  Checked and time turkey goes into oven determined

And that’s when things started to deteriorate. The sweet potatoes were cooking in the microwave.  Suddenly, the microwave quit.  Just a thrown circuit breaker, we thought, because everything but the microwave and the stove was still working.

Except that no circuit breaker was thrown.

Cooking without a stove was not on my check-list.  We called electricians who didn’t answer.  We tried the electric company.  They only wanted to know about power outages.  The cell phones of now-alerted guests started Googling and calling.  Around noon, Jeremy found an electrician who actually answered the phone.  But he was in the middle of his family’s Thanksgiving dinner. Nonetheless, he talked us through some tricks with the circuit breakers over the phone.  Nothing worked.

Just as we were anticipating a desserts-only Thanksgiving Dinner, the electrician called back.  He said, “Give me some time and I’ll come over.  I hate to think of your ruined Thanksgiving.”  An hour later, he was here.

It turns out that we have a very big problem involving some burned out wires that I wouldn’t explain, even if I could. Our new hero, here for an hour of his Thanksgiving, managed to make a temporary fix and got us a working stove.

Thanksgiving dinner was later than planned.  But my last-minute entry to our Grateful Jar said it all—“We are grateful to John the electrician for giving us back Thanksgiving.”