Suddenly, They're All Gone

Carol Mithers is a West-Coast-based journalist and author.   On March 22, her posting Suddenly, They’re All Gone appeared on The New York Time’s “New Old Age Blog.”

One week later there were 579 comments.

Her topic, the overwhelming-ness of being part of the sandwich generation, is not unfamiliar to us.

In our 70’s (and for the lucky ones, beyond the 70’s) many of us are fully functional and are not a burden on the next generation.  But unless we are very lucky, we will be a burden on someone some day.

Mithers tells about having her older relatives’ care-givers on speed dial; about knowing that things would not get better.  She writes, “Frantic was my new normal and normal the new never…”  She goes on to talk about “listening” because the past returns for the old when there is no future.

In the end, she says, “Their singularity dazzled me.  Their selves, revealed in all their layered complexity, could never be replaced.  I came to know them—and I fell in love.”

Many of us have “walked” in Mithers' shoes.  But soon it could be us needing the help. Suddenly, They're All Gone is a story that we need to hear. http://newoldage.blogs.nytimes.com/2013/03/22/suddenly-theyre-all-gone/#more-14730)

The audience at Symphony Hall on Friday was cheering.  We had just heard the Handel and Haydn Society Orchestra play a great concert of Mozart and Beethoven pieces on period instruments. I wondered aloud why the cello section was sitting stage left rather than in its usual place to the right of the conductor.

“It’s because that’s how the orchestra played it back then,” opined Peter, as if he knew.  “I don’t think so,” replied our friend Margaret.  “I think it is up to the conductor.”

I explained to Margaret that Peter has a way of saying things in an authoritative voice that fools people into thinking he knows what he’s talking about.

Is this a male thing?

American women spend a total of $7,000,000,000 (give or take a billion or two) on makeup every year.  According to Shine, a Yahoo website, the average woman spends $144 annually on cosmetics.

What are we buying?  Hope? Do we actually believe that face cream will keep us young?

I saw an ad the other day for a face cream that I bought a year or so ago because it was NEW!!!  The ad promises that “visible wrinkle results start day 1”.   I am about to finish my second jar of that cream.  My wrinkle results are “visible,” but in the wrong direction.  Knowing that, will I keep smearing cream on my face twice a day?

We hear the coupon biz isn’t doing so well.  People are tired of the daily emails, and customers are not returning to pay full price once they’ve enjoyed their bargain.  So merchants are unhappy too.

Nevertheless, when good friends said they had bought a cut-rate brunch coupon for a local hotel, we agreed to join them.

It was not a flawless experience.  When our friends didn’t come by to get us on time, we thought they were held up in traffic.  Eventually, we called. They had forgotten.

I called the restaurant, and they told me they could take us later, implying (I thought) that although they were jam-packed, they would seat us.  When we arrived, the restaurant was nearly empty.  We wondered why.

Although we always have a great time with our friends, the food was mediocre and the service wasn’t much better.  Peter summed it up, “When we came in, we wondered why the restaurant was so empty.  When we left, we wondered why it was so full.”

So we saved some money at a restaurant we really didn’t want to go to and didn’t like.

No wonder the coupon biz isn’t doing so well.

Do you know what paraprosdokians are?  Paraprosdokians, as I recently learned, are figures of speech in which the latter part of a sentence or phrase is surprising or unexpected.

I now realize that the message on a birthday card I have on the bulletin board above my desk at work is a paraprosdokian. “It’s not the years in your life that counts,” it reads.  “It’s the life in your years.”

Here are some more:

3.  Knowledge is knowing a tomato is a fruit.  Wisdom is not putting it into a fruit salad.

Some paraprosdokians are more relevant for us 70-somethings, such as

1. Nostalgia isn’t what it used to be.

2.  Getting old is no problem.  You just have to live long enough.

3.   I’m supposed to respect my elders, but it’s getting harder and harder for me to find one now.

From time to time, I think about the difference technology has made in my life.  Usually I think of it positively, like when our son calls us from Brazil using Skype and it’s free.  Or when we “visit” our grandchildren via our iPad and watch what they are up to at that very moment.

I depend on Google as my encyclopedia.  I use the web as my restaurant-finder and movie reviewer and weather.com to see how warmly to dress. And just yesterday, I ripped a dusty, yellowed-paper list of phone #’s from my bulletin board at work because my computer has more current info.

Peter and I think the “lady” on our GPS has saved our marriage.  I have loved my BlackBerry for years, although I may have to switch my allegiance to the iPhone’s Siri, when she improves her batting average.

But when someone emails our book group to ask if we are attending the monthly meeting, and people REPLY TO ALL, that’s another story.  I can wait until the meeting to know if Mary or Sue is attending.  Then, there are those at work (You know who you are!) who always REPLY TO ALL.  It takes a nanosecond to decide who needs to see your reply.

Give the rest of us a break.

The Feminine Mystique at Fifty

I read The Feminine Mystique fifty years ago.   Betty Freidan wrote her game-changing book after interviewing her Smith College classmates for their fifteenth college reunion.  She called the widespread unhappiness that they reported "the problem that has no name”.

In honor of the fiftieth anniversary of Freidan’s book, PBS produced MAKERS:  Women Who Make America, and thanks to the suggestion by 70-something.com reader Judy Uhl, I’ve had a look at it.

People like Gloria Steinem, Letty Pogrobin, Ruth Simmons, Judy Blume, Sandra Day O’Connor and Patricia Shroeder, all women who broke the mold, make an appearance.  They looked like me in the clips from fifty years ago and they look like me now as they reflect upon that time.  Jowls and wrinkles and ridges between their brows, but still a spirit and energy that belies their age.

The Makers reminds us that flight attendants (then called stewardesses) used to be required to retire at age thirty-two and that want ads had separate columns for Help Wanted-Men and Help Wanted-Women.

We see the women leaders who inspired us to march for women’s rights and freedom from violence.  Who backed Anita Hill, the brave young woman who accused Clarence Thomas of harassment.  Who ran for Congress.  We see a younger Hilary Clinton saying maybe she should have stayed home to bake chocolate chip cookies and as she is today, our accomplished former Secretary of State.

And The Makers also shows us a new generation of role models, Sheryl Sandberg of Facebook and Marissa Mayer, Yahoo CEO who caused a stir last week by ordering Yahoo’s telecommuters back to the office.

The Makers reminds us that we are not done yet.  Women still do not get equal pay for equal work. And we have to remain vigilant because there are those who would take away rights that women have fought for.

The Makers honors those who got us this far, and reminds us that we still have a long way to go. 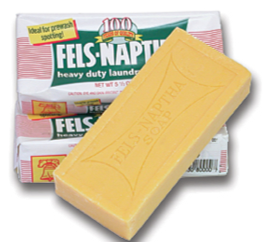 Last fall I got a salad dressing stain on an almost-new Ralph Lauren cotton sweater. It was a cream-colored crew neck with a couple of buttons on the shoulders, and I loved it.  It was perfect with my favorite khaki pants.

I was sure the stain would come out with Shout or whatever pre-laundry treatment I had, but alas, it didn’t.   In retrospect, I should have taken it to the cleaners from the get-go, but I didn’t and the sweater ended up in the Good Will Bag.  I still miss it.

More recently, in a casual conversation with a woman of my generation on our trip to India, I was regretting wearing my white slacks. They looked like they would never be white again.  “Just rub a little Fels Naptha on the spots before you wash them,” she suggested.

Now that’s a name I hadn’t heard in about sixty years.  “Does Fels Naptha still exist?” I asked.  “Of course”, she replied. “I wouldn’t use anything else for stains.”

She was right.  I found Fels Naptha in the laundry aisle at my grocery store.  The wrapper looked exactly as it had when I was a child.  More important, it is a miracle bar.  Stains on my white placemats.  Gone.  Ring around the collar on one of Peter’s shirts.  Gone.  My white pants.  White.

The label calls it a heavy-duty laundry bar soap.  I call it a miracle.

Just too late for my cream-colored Ralph Lauren sweater.

Two weeks ago my glass was not just half full. It was full.  My closest family gathered in New York City to honor me and celebrate my 75th birthday.  I loved every minute.

Two weeks later, my glass was half empty.

Nothing serious happened, but a bunch of little things added up.  Like last Sunday morning when our furnace started clanging and banging, followed by a huge hissing noise.  Our basement filled with so much steam that it was impossible to see.  We called our utility company. They told us that they would be here within the hour and that we should leave the house.  So, rather than disturb neighbors at 8:00 on a Sunday morning, we waited in our car—grabbing only a computer. (That shows what’s important these days.)

Turns out our life was never in danger, but it took three visits from the utility company and one from a plumber before we felt we could safely leave the heat on.

The rest of the week was more or less OK, but then yesterday Peter and I were not nice to each other.  This is a rare occurrence.  Maybe it started with his parking ticket on Friday.  Not to brag, but I have never got a ticket for overstaying a meter.  Although I didn’t make a fuss, it was annoying.

Then Saturday morning there was a to-do over the blueberry muffins I was making (while he read the paper, I might add).  When the oven timer went off, I didn’t come running—I was upstairs getting dressed. So he yelled up from the kitchen, “What should I do?”  This from a man who is a better cook than I am.  So I yelled down.  “Look!  If they are done, take them out.” And then, one sock on and one sock off, I ran downstairs and took them out myself.

I won’t mention that he left his car keys in his jeans when he threw them into the laundry.  They went through the washer and dryer undetected.  Washing an electronic key is not recommended.  That’s all I’ll say about that.

Later in the morning, our usual walk around the Reservoir was pretty silent.  That gave me plenty of time to feel sorry for myself.  But, as I write this, my perspective is returning.  The glass is filling up.

At our age, it’s best not to stay angry too long.