An Hour of Panic

Peter and I left home together last Wednesday. After we parked the car, we parted, both within a five-minute walk of our destinations.  I was off to work, and he was meeting his friend Adam for coffee.  It was 8:40.

Forty minutes later, I got a call from Adam asking if I knew why Peter hadn’t kept their appointment.  It didn’t take long for me to decide that the worst had happened—either he had collapsed with a fatal heart attack, been hit by a car, or had fallen and was lying unconscious in the gutter.

I started by calling Peter’s cell phone.  As I expected, it wasn’t turned on.  I called home to see if there were any messages (from the police or whomever).  Nothing.  Then I accepted Adam’s offer of help and asked him to walk to where we had parked the car to see if it was gone.

Of course, the story ended well, or this would be a very different blog posting.  Turns out that they had both been waiting in the right place, but had somehow missed each other.  Unbelievable.

More than a week later, I still hold Peter longer when we go to bed.  Each moment that we have together is suddenly even more precious.

And, he’s promised to keep his cell phone on—at last.

DHA is an omega-3 fatty acid that is present in many of our organs, including our brains. DHA supplements are said to be helpful in preventing dementia, something that we 70-somethings worry about.  Actually, my much younger colleagues will often have “senior” moments when they can’t recall a name.  But they don’t worry about them the way we do.

Although forgetfulness has not been a problem for me so far, I am willing to take some preventative measures.  My daughter-in-law Katrina had heard that DHA supplements are helpful. I thought I’d give them a try.

When I made my shopping list a few days later, I couldn’t remember its name. I had to call Katrina on the way to the store.

The irony of “forgetting” the name of the cure for forgetting did not escape me.

I hope to remember to take it.

The Men in My Life

I have always had a lot of males in my life.  In my generation of cousins, I am the only female.  I have two sons, two grandsons and a brother.  They are all very entertaining.

Last week in India, for example, when I emailed our son Jeremy that Peter and I were the only ones in our group of ten that didn’t see a tiger in Ranthambore National Park in Rajasthan, he replied, “Well, if it makes you feel any better, we didn’t see any tigers yesterday either.”

And when I emailed a picture of Peter and me in front of the Taj Mahal, my one word message said. “Spectacular”.  Our son Seth’s reply email—“The building in the background is pretty nice too."

But most of all I am entertained by, and proud of, my husband Peter.  India isn’t for sissies.  Or for most 82-year-olds, especially with Parkinson’s Disease.  Yet my intrepid husband, although he occasionally needed help with railing-less stairs in old forts and temples, was a trooper.  He was more courageous in trying local specialties; his thoughtful observations such as “All the men on motorcycles are wearing helmets; the women behind them aren’t” made the trip better for all of us. His quick and dry sense of humor entertained everyone.

Before we left for India, I worried.  I thought this trip might be a bit much for Peter.

Can I Write about India?

When you think you have seen everything, along comes India.

Just back from two weeks in India that ended with thirty-six hours of flying from Udaipur to Delhi to New York to Boston, it’s hard to sort out the real from the surreal. All of the reading about India and all of the movies about it did not prepare us for the press of people, the mothers begging for rupees for the tightly wrapped babies in their arms, the streets with their endless symphony of honking horns. Cows and goats and elephants and camels and pedestrians and rickshaws and motorcycles and buses are on the roads.  Nothing prepared us for the aggressive hawkers at every tourist spot. Nothing prepared us for the majestic Taj Mahal.

Nothing prepared us for the crush of the Metro where every rider must go through a metal detector and where there is a special waiting place and a special car for women.

And there is the mud and the dust that gets in your eyes, your throat, your clothing from the streets that have no sidewalks.

There is the stunning yellow, orange, green, red, purple and pink of the sarees, speckled with sparkles.  There is the heavily turmeric-spiced food (delicious) and dozens of wonderful vegetarian dishes.  There is the spirituality of the country exemplified by the nightly chanting of the priests on the banks of the Ganges and the cremation ceremonies there each morning and the temples and mosques that dot the cities.

There are forts and palaces and more history than can be absorbed.

It has to be seen to be believed.

In the spirit of revealing my deteriorating self, it’s time to talk about eyes. I realized I have lucky eyes when I noticed my peers reaching for glasses to read the phone book when we were in our forties.  It was years before I needed reading glasses.  (Of course, no one needs the phone book any more—Google takes care of that.)

Then about four years ago, my optometrist told me I would see better if I got my cataracts removed.  He was right.  Colors became sensational again.

Lately, though while reading to our grandchildren before they go to sleep, I’ve noticed that they don’t have a lot of light in their bedrooms. I have to strain a little to see, even though the print is large.

But the final realization came the other night.  I was on my usual couch spot reading when I realized that the three-way bulb in the lamp on the end table needed to be upped to its highest setting.

According to the literature, a 60-year old needs twice as much light as a 30-year old because our pupils decrease in size as we age and the lens in our eyes thickens. Thus, less of the available light can enter the eye.  We don’t notice it so much during the day, but at night it’s as if we are wearing sunglasses.

Happy Fifth Birthday to the 70-something Blog

It’s five years since I wrote the first 70-something blog post.  On each anniversary, I take a look to see if I have kept its promises.

“You are invited to join me on a journey into my seventies. Thirty-seven days from now I will celebrate the beginning of my next decade. Ten years ago, I kept a journal of my 59th year in preparation for turning sixty. Sixty sounded very old then. I had no idea that in my sixties, I would travel to Cuba, I would bicycle in New Zealand, France, Italy, Switzerland, Spain, Denmark, Ireland and more, that a child of mine would publish a book and another give us two grandsons. I didn’t know I would study beginning Spanish or still be working at a job I love after 27 years. I certainly didn’t expect to replace a knee. I didn’t know that I would have to give up gluten for the rest of my life.

So what will the 70’s bring? Sure, some sad things—a given as we age—but I will try to embrace change and appreciate each day. A big order, but I’ll do my best.

Over the years, I’ve published a lot of “personal” essays and even more travel articles as an extracurricular activity. But this is my chance to write what is important to me. I’ll let you know my triumphs and my low-points.

I’ll probably write about my parents and being a parent. I’ll write about the role exercise plays in my life and should play in yours. I’ll share my thoughts about ageing in the workplace. I’ll report on my efforts to catalogue my wrinkles.  And more. Please stay tuned. “

And now I am about to be in the second half of that decade.  I have five more years to be “young-old” according to the research on aging.

I plan to make the most of it!

Once more, I want to pass on some excellent advice from Jane Brody, cookbook author, speaker and Personal Health columnist for The New York Times.

A 70-something herself, Brody tackles important issues for all ages, but this one is for us.  It’s about preserving independence in old age and “How to know when home alone is no longer a good idea.”

Most of us would prefer to age in place, but that takes planning.  When Peter and I traded our bringing-up-the-kids house for our smaller empty-nest house, we decided to buy a home with a bedroom and full bath on the first floor just-in-case.  Then we fell in love with the house we’ve lived in for the last eighteen years—with no bedroom or full bath on the first floor.

We’ve been lucky, but chances are that one or both of us will need help at some time.  The Brody article reminds us to plan ahead.

We’re big movie fans.  We’ve seen most of this year’s Oscar contenders.  Our favorite was The Sessions.   It is based on the true story of Mark O’Brien, a young man who spends twenty-one of every twenty-four hours in an iron lung, mostly paralyzed from the neck down from polio. When he decides that he wants to experience sex, friends help him find a sex surrogate. The relationship between them is the story.

The New York Times columnist Frank Bruni uses The Sessions to illustrate the foolishness of the way we relate to our bodies—he calls it a war.  Bruni observes that we are constantly talking about how imperfect our bodies are, and that we keep trying to do something about them, often in vain.  He tells us we are so much more than “these wretched vessels.”  He reminds us that we should make peace with our bodies and define ourselves not by “what is measurable from the outside” but by “what glimmers within.” 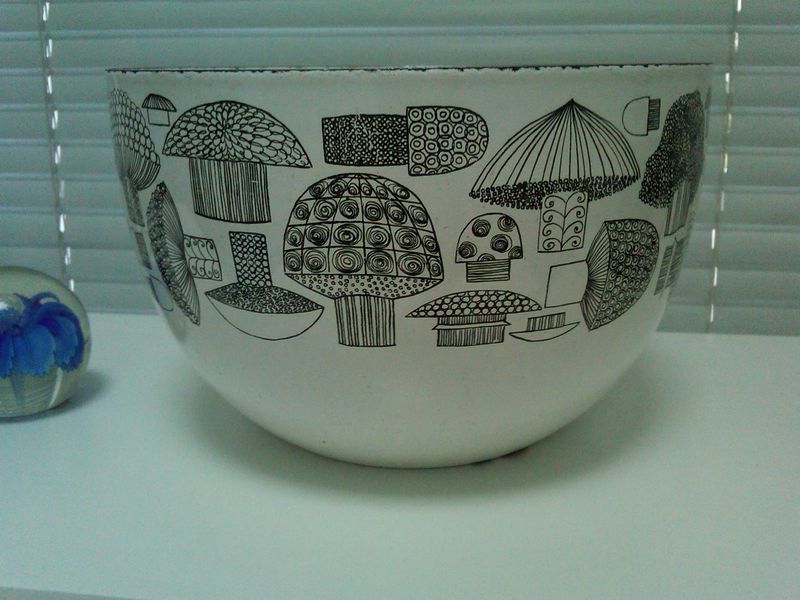 I don’t remember who gave us our mushroom bowl as a wedding present.  But we have used it as a serving bowl more nights than not over the past forty-five years.  It is the go-to serving bowl for popcorn, stir fry, and pasta dishes, especially spaghetti with shrimp, tomatoes and broccoli. The bowl is enamel over metal, and it has aged a bit, but so have we.

What’s amazing is how common that bowl is among people in our generation.  Our friend Margaret who often contributes the salad to our pre-concert dinners, always brings it in her mushroom bowl.  And a neighbor used the same bowl at a fancy dinner party that we attended in her home recently.  We all find it indispensable.

I think I’ll have my mushroom bowl buried with me, maybe full of popcorn.