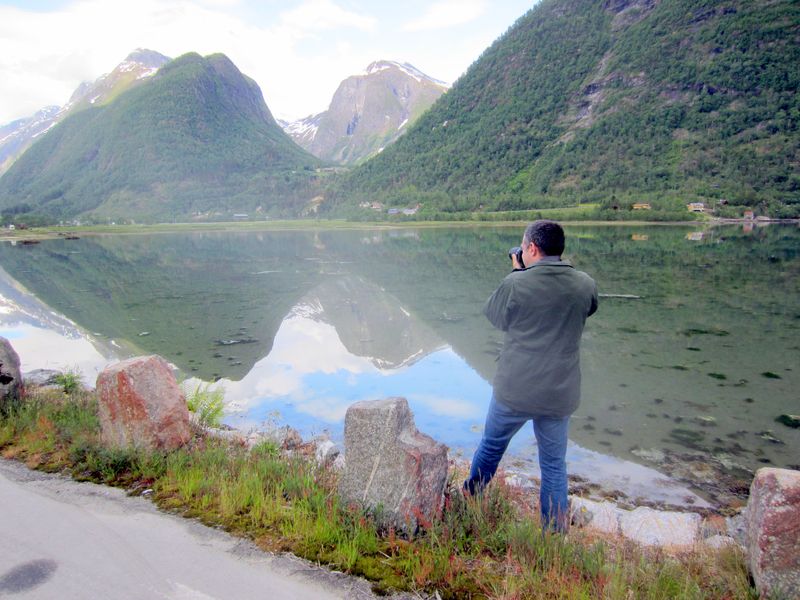 When The New York Times’ Frugal Traveler (aka our son Seth) invited us to Norway for a week as part of his frugal summer in Scandinavia, we were thrilled.  Although we joined him the last two summers, first in Nicaragua and then in Croatia, we would never take another invitation for granted.

Our trip started when we met Seth in Oslo and left on an eight-hour bus trip to Fjaerland where we spent two nights at a campground at the end of Norway’s longest fjord.  My book lay unread on my lap as we traveled through a countryside dotted with farming villages, snow-capped mountains, waterfalls, deep green hills, and grazing sheep, all under a cloudless sky.

Our trip ended with two nights on a sturdy old cruise ship sailing along the western Norwegian coast.   It was the season of the midnight sun, and at midnight we joked that we couldn’t tell if the sun was rising or setting.  Peter and I had a cabin, but Seth slept in the lounge in true Frugal Traveler fashion.

In between, we visited Brønnøysund, Bergen, and Balestrand. We biked on the island of Vega, a UNESCO World Heritage Site where the friendly locals invited us to share in a festival marking the summer solstice, and a young woman named Ina opened the eider duck museum just for us because we arrived there after it closed.  People were kind to us everywhere, partly because they were charmed by Seth, but mostly because they were just nice.

There were many unforgettable moments.   One, in Brønnøysund when we were killing time waiting for the ferry to visit Vega, we came upon a choral competition in the center of town.  We sat on benches and listened to  groups from all over the area singing their hearts out.  We had no idea what was going on, but we loved it.

At the campground where we stayed for our first two nights, Peter and I went for a walk after dinner while Seth wrote.  It was about 9:00 p.m.  The sun was shining on two houses high in the mountain, one a deep red and the other a dark mustard color, typical of the region.  We went back to get Seth because it was such a beautiful scene. The three of us walked together, taking pictures of the mountain and of each other, a family without a care in the world.

Over coffee on our last morning together, we looked at the hundreds of photos of our week that Seth had downloaded to his computer and tears flowed (mine).

The trip itself was a dream come true, but what really mattered was the chance to watch Seth work, to laugh at his jokes, to have him laugh at some of ours, and just to share a piece of his life.

At our age, we realize that our best days may be behind us, but as our trip with Seth suggests, there can be some very good ones to come.

Thank you for posting about your lovely trip with your son, the Frugal Traveler. My husband and daughter, age 26, are in Spain together for a week. It is a respite for my husband as we left our jobs in Thailand (we raised our daughter and lived there for 20 years) four years ago, the day my mother became too ill to care for my father who suffers from advanced dementia. It is an extension of discovering the world as part of our daughter's education. She is fresh out of grad school and just completed her first year in a position in higher ed. but travel is way beyond her budget. We had plans that were cut short by the extraordinary needs of my parents but I recently became determined, through the exhaustion of caregiving, that we must try to keep that part of our life that we loved, freedom to see the world. I will pick up when they return with a trip to NYC to visit daughter and a trip to introduce her to Tanglewood, our summer delight - many years before she was born and we became expats. I am so grateful that she continues to want to travel with us and that we can do it, even if it is one person at a time. I wish you more wonderful journeys with your family.

Judy, I found your blog thru a tweet by your son. I was curious to see what you would write and I'm very happy to have read it. My mom turned 79 but she has never wanted to travel to places she has never been. I find it so beautiful that you and your husband did take the opportunity to share trips with your son. I visit home about once a year and it saddens me that I'm far away from my mom and even though time is clicking, I don't want to assume who will leave this earth first. But I do wish I had more time with her. There are five other siblings in my family and they are all geographically closer to her so she is not alone and it's comforting. But nothing can make up for lost time and much less for amazing experiences and memories together. Seth is very lucky. And so are you.

I wish you to have many more best days together as a family. I am glad to have discovered your blog today thru a tweet from your son and I am impressed that age is no barrier to be a blogger. You prove it! thank you!

Hi. Good reading and a good perspective of americans travelling in Norway. I am from Lofoten, where Seth went after he left you. I travelled with him and a few other people (among them my sister) trough the islands and showed him around. It was a very nice trip and I think Seth enjoyed it very much! I am looking forward to his artcle on Lofoten and I hope you someday will visit our islands.

Hi! Just wanted to leave a comment and say thank you for visiting Vega, and that it was my pleasure showing you around the Eider museum. I just read the article that Seth posted about the trip, but it was so nice to hear your thoughts on the trip as well.
Hope you come back to Norway some time!