Our next-door neighbors, Dick and Margie, have a lot in common with us.  They are about our age, with kids our kids’ age.  They are facing issues of growing older just as we are.

We try to have a drink together every few weeks.  We plan on one hour and we keep to it.  We laugh together, especially at ourselves.  We can repeat the same stories, assured that the other couple has already forgotten them.

The other night we were talking about summer camp, a new topic for us.  Margie and I agreed that summer camp was a formative experience for us, and although my camp was in Ohio, and Margie’s was in New Hampshire, they had much in common.  We discovered that we both liked riflery, although I think I earned more bars on my sharpshooter medal than she did.

When Margie broke into song with “Peace I ask of thee oh river…peace, peace, peace”, and I joined her in singing this staple of camp songs, our husbands were quick to remind us that our hour together was over.

I am always delighted, and usually surprised, when people tell me that they read my blog.  I don’t “expect” anyone to read it; I rarely tell people I write it.  So I was surprised when a new colleague stopped me in the hall on Friday to tell me how much she is enjoying my blog.  She was going into a meeting and added over her shoulder, “You are courageous.”

Some people have said I am a good writer or that some of the things I say strike a cord with them.  But “courageous”?

I had been in a couple of meetings with this woman.  Considerably younger than I am (Isn’t everyone?), I remember thinking that it would be nice to get to know her better.  She certainly has gotten to “know” me better.

Later that day, I saw her again when I passed by her office on the way to another meeting.  She elaborated a bit on her comment.  She said she meant that I “put myself out there” with all my vulnerabilities on display.  To her that is courageous.

I assured her that all my vulnerabilities are not on display—there are some things I don’t share—at least not yet.  I thanked her for reading my blog and went off to my meeting.

Courageous.  It has a nice ring to it.

In the late nineteen eighties, my neighbors Valerie and Reggie and I started exercising together.  Two evenings a week, we would gather in Val's basement with a Jane Fonda exercise tape and exercise until we felt the "burn"  Our husbands accused us of exercising our mouths more than our bodies, but we actually did both.

At the end of one school year, my graduating high school senior had not mentioned his senior prom.  His father and I had no idea whether he was going, let alone with whom. And we were not about to ask.

But Valerie knew. She knew from her daughter that he was going and who he was going with.  That was only one example of the many things I learned about my kids while exercising, but it may have been the most memorable.

Twenty-three years later, long after Valerie moved away, she and I still exercise our mouths via weekly phone calls.  When we spoke on Sunday, I mentioned that I hadn’t talked with this same son recently, and didn’t really know what was going on with him.

But, once again, she did.  They had been exchanging emails about a talk she had asked him to give at a fundraiser.  She told me about the event and when it would happen.  First I’d heard about it.

The Spice of Life

For decades, we paid what seemed like outrageous sums of money for teeny jars of spices. Then we discovered Costco with its giant sizes of just about everything and started buying their huge containers of spices.  The cost –usually less than half of the supermarket cost for more than ten times the amount.  Since we never use up that much before the flavor disappears, we sometimes try to pawn some off on guests—“How about taking some oregano home with you?” But usually we just replace them when they reach a certain age.

Our greatest spice consumption is red pepper flakes.  That’s because Peter puts it on almost everything.  We pour some from the big container into a small jar that usually joins the salt and pepper on the dinner table.

A month ago when we went to Costco, our small jar was almost empty so we bought a new super-sized container.  However, when I went to put it into the pantry, I saw there was another supersized container of—you guessed it-- red pepper flakes.

I saved the receipt, and when we returned for our monthly Costco visit yesterday, I returned the newer container.  Moments later, as we made our way down the spice aisle, I turned to Peter and said, “Let’s get some red pepper flakes.”

A look of disappointment flashed across his face.  “You took the words right out of my mouth, he said.”

It is four years since Peter tripped while we were out walking, grabbed me to break his fall and got a few scrapes.  I, however, broke his fall and my hip.

I can’t bear to think about all the things that went wrong that day, but I’ll never forget the ER doctor who finally checked me out at midnight.  He told me that most people who break a hip are dead within a year.  Not exactly what I needed to hear at that moment.

In the morning, the surgeon decided that I didn’t need a hip replacement.  Nailing the bone together would suffice.  He warned me, however, that I would be prone to arthritis in that hip.

So I wasn’t surprised when in June almost four years later, my left hip began to ache.

Three weeks ago, I mentioned my pain to Kathy, my trainer/physical therapist.  She asked me some questions about the pain and concluded that some new exercises might fix the problem.  She did not think it was arthritis.

She introduced me to something called a “foam roller” (she happened to have one in her car) and assigned me five punishing exercises to add to my already long routine.

Three weeks later, I am not totally pain-free.  But I am on the way.  Without Kathy, I might be looking at a hip replacement.

I am very grateful.

Sad, But Not Unhappy

Some changes sneak up on us.  Last Sunday, for example, we recognized something that we had been trying to ignore.

We were taking an end-of-Labor-Day-weekend morning walk with our hosts before heading home from the Berkshires.  It started with a long steep hill.  My friend Tina and I walked in front, engrossed in our conversation.  Before we knew it, we were way ahead of the men and they never caught up with us. Turns out that the steep uphill was difficult for Peter, and he had to take it slowly.

How different from our twenty-plus years of biking vacations when Peter, always the strongest, had to wait for us at the top of every serious hill!

In mid-afternoon, we started our drive home just as the rain began.  The long weekend backups were worse than usual because of the weather.  I drove most of the longer-than-expected trip. More and more, I am doing the bulk of the driving.

Over dinner that evening, I asked Peter if he was unhappy about his declining energy, even though at eighty-one, that is to be expected.

“Sad, but not unhappy,” he replied.

The Passing of Summer

Biking to work one day last week, my eyes watered from the cool morning air. The temperature felt like October, and my tearing eyes were a harbinger of fall.

It's only a matter of weeks until my mitten-protected fingers will be numb from grasping the handle bars.

Climbing into bed that night, I appreciated the warm sheets, knowing that before long, they will feel like ice until our bodies warm them.

My summer whites are piling up on the guest bed waiting for their once-a-season bleaching before they are relegated to the guest-room closet to wait for next spring.

I see tinges of orange in the maple tree leaves outside my office.

Our book club, cancelled during the summer, convenes next week.

Worst of all for me, the days are quickly growing shorter.

I remind myself that fall is beautiful.  That winter is tolerable.  And, if my luck holds, I have more springs and summers in my future.

Uncle Sidney was my mother’s baby brother, the youngest of six.  He was a generous man with a great sense of humor.

In an attic eave tucked in a box with a bunch of old pictures, I found a letter Uncle Sidney wrote to me when I was born Judy Fay Faskow.  It was very sweet.  Not surprising.  But what struck me today was seeing a letter written on a manual typewriter.  Errors were not corrected.  Spellcheck didn’t exist.  Here it is: 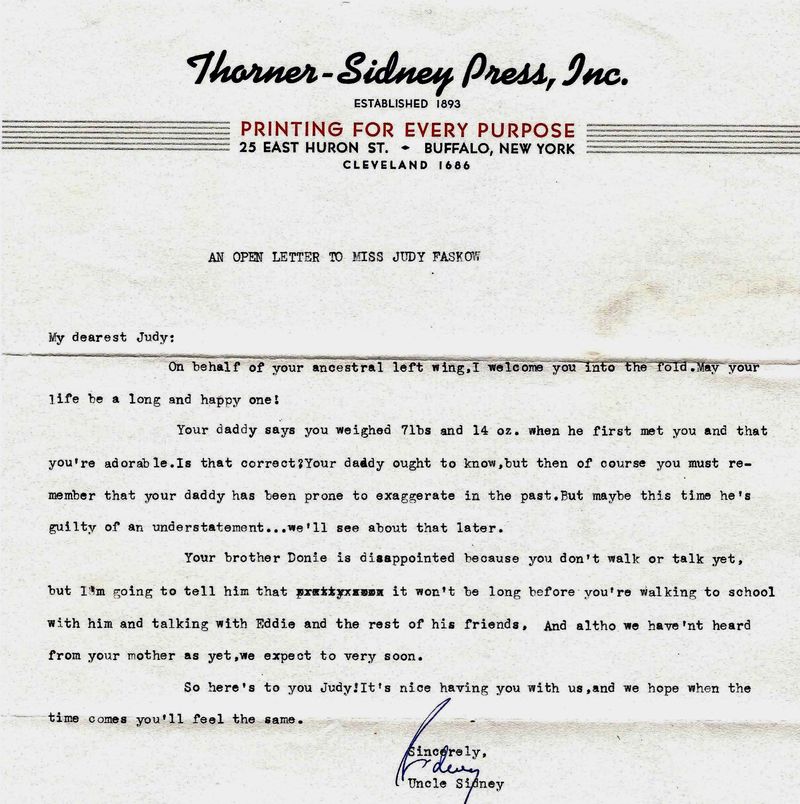 Of Rivers and Fruits

The Amazon is the second longest river in the world.  But according to recent media reports, when college students hear "Amazon", they think first (and possibly only) of Amazon.com.  And when they hear "apple", their first thought is not about an item to win favor with their elementary school teachers.

Not at our house, however.  For years, we have looked with envy at slick Apple iPods and laptops.  When the iPad came out last year, we were tempted, but managed to hold out until about a month ago.  The new version with its nifty cover was too much to resist.  Besides, our grandchildren asked us to get one so that they could play with it when we visited them.

Two weeks later, our PC started acting like a bratty kid, telling us over and over that we are running out of space, no matter what we deleted. So we bought a Mac laptop.  It's beautiful.  Our photos look better.  It opens everything quickly.  It doesn't tell us we are out of space.  It doesn't have lots of wires twisted next to it. It's a challenge to learn a new operating system, but we are working on it.

Change happens a bit slowly at our house. But it happens.