It's been nine days since we returned from Croatia, and I have been back at work for a week. It's time to move on.

But our vacation keeps on going in my head and heart. This picture of Seth taken by Peter says it all. 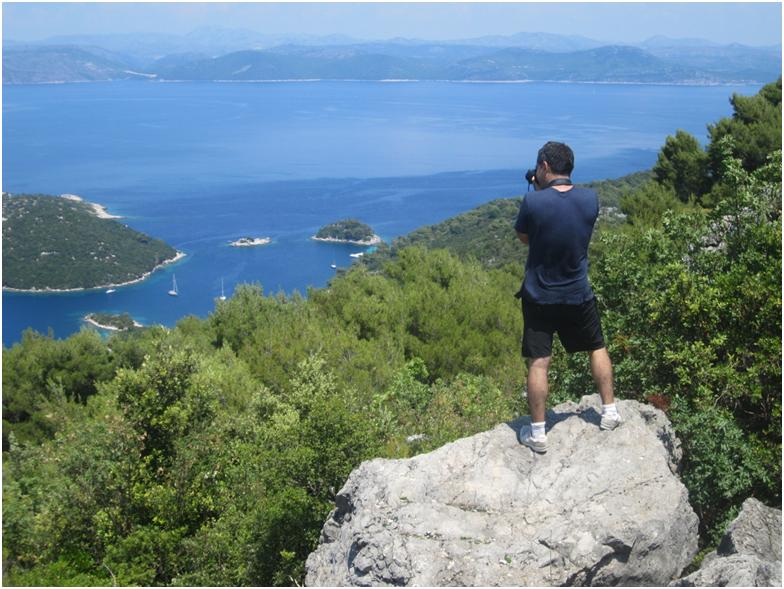 Me and the Orange Mini-Brum 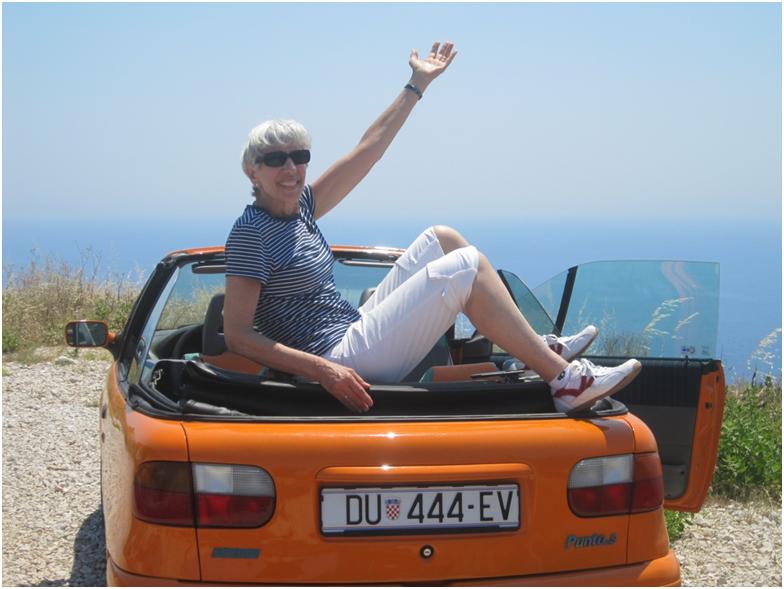 Only in my dreams was I ever a lanky blonde with long golden tresses that flew in the wind as I drove my sleek 1950's red convertible on the streets of Pittsburgh, Pennsylvania. More than half a century later, on the winding mountain roads of Croatia overlooking the Adriatic, I almost was that girl.

We were on the island of Mljet (pronounced "Mil yet") two hours off the Croatian coast, under a cloudless sky with the temperature in the 80's. OK, our son Seth was driving (not me) and it was my short silver hair that was blowing in the wind, but that didn't really matter.

Who, at age seventy-three, gets to be driven in a bright orange convertible by their son, who pulls off a guard-rail-free road just short of going off a cliff, to marvel at the aquamarine sea dotted with random islands, gorgeous yachts and tiny villages tucked into the hills below?

The convertible, a Fiat, also served as my changing room, allowing me to don my bathing suit so that we could swim from a sandy beach in a small cove with about six other people, as three sailboats bobbled on the current about a football-field length away.

Not quite a lanky teen-aged blonde, but still, a dream come true. 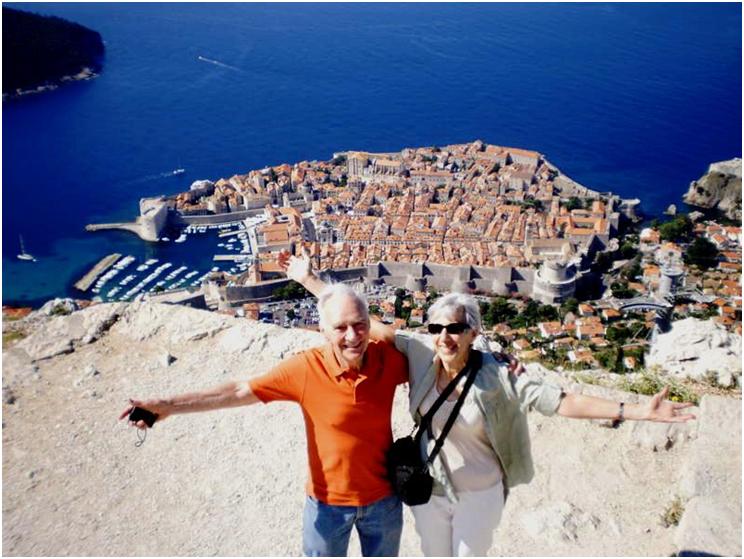 When our son Seth, the New York Times's Frugal Traveler, told us that his summer assignment was to travel to countries on the coast of the Mediterranean, we asked if we could join him for a week. Last summer, when he traveled from São Paulo to New York, we had met him in Nicaragua, and we weren't so sure he'd want to put up with his spunky, then old (and now a year older), parents again.

But he said he would and even allowed us to choose our country. We had wanted to visit the Dalmatian Coast for years, and seeing Croatia frugally was fine with us. So that's where we've been.

To say it was an adventure we will treasure is an understatement. Croatia's coast is a never-ending panoramic picture postcard. The Adriatic Sea is a palette of blues surrounded by hills/mountains that come down to its shore. You have to see it.

This area has a complicated history. You have to read it.

But the people have to be experienced, and that is easy to do in Croatia. In all of our travels, we have never met friendlier or more helpful people. We were treated like treasured guests by the people who rented us apartments or rooms in their homes and exactly the same way by people on the streets of Dubrovnik, and on the islands of Mjlet and Korčula.

Of course, the best part was being with Seth, watching his remarkable competence. He doesn't plan ahead much, so we didn't even know where we would go, or how we would get from place to place. Except, we knew it would be frugally.

We also didn't know that we would love Croatia.

We never see enough of Seth, so to have a solid seven days with him was a huge bonus. But it came with a price—saying good-bye without knowing when we will see him again. So, having just returned, I do feel a little sad. But more than anything, I am very grateful.

To see Seth's take on his week with his parents in Croatia, http://nyti.ms/mLTi1N

Jane Gross, a reporter for the New York Times and contributor to “The New Old Age Blog”, has written A Bittersweet Season—Caring for our Aging Parents—and Ourselves.  In this just-published book, she tells the story of caring for her aging mother.  At the same time, she offers advice and strategy for those who find themselves in a similar situation.

In the book, Gross describes a “talking board” that she and her brother got for her mother when her speech deteriorated.  The board was programmed so that when her mother pushed a button, the board would say (in the recorded voice of her son),  “I want tea,”  or “I’m cold.”  Gross and her brother offered her the chance to have two of the buttons say whatever she wanted.  She chose “Get Out of My Room” for one, and “You’ll be old someday too, you know,” for the other.

I was struck by her second choice because when I see people who disrespect the elderly, I often think, “You’ll be old someday too.”  But then I add a second thought, “If you’re lucky.”

Sometimes it makes a difference that Peter was born eight years before me.  For example, since it was before my time, he had to explain to me what canoodling meant.   (And if you don’t know, it is “kissing and cuddling amorously”.)

This all came up because we have been hearing a lot about sexting lately.  I admit that I don’t communicate much by texting, but sexting is completely out of my comfort zone. To me, canoodling sounds like more fun.

Peter claims that the term came from Norumbega Park, an amusement park adjacent to the Charles River, in Auburndale, Massachusetts, maybe ten miles from Boston.  Opened in 1897 and closing in 1963, according to Wikipedia, more than 5,000 canoes were parked in a 5.8 mile length of the river in the early 1900’s (even before Peter’s time).

In that era, men couldn’t visit women without chaperones. But because everyone figured that they couldn’t do anything serious in a canoe without tipping over, couples were allowed to go in canoes unescorted.  And they did.

By mid-century, when the Charles River became polluted and mores had changed, canoeing on the river lost its allure.  But the term canoodling lived on.

True or not, it’s a great story.

I have tried to love my laugh lines, and I have failed.  I realize that they reflect my long joy-filled life.  I have stopped standing in front of my mirror imagining a new face by strategically placing my fingers at the edges of my eyebrows and pushing up.  It’s hopeless.

Yes, I have made fun of public figures whose faces don’t move when they speak.   Still, I regret all those days on the beach before sunscreen.

In a recent article called “The Case for Laugh Lines” (N.Y.Times 5/29/11) Dominique Browning talks about age-deniers and how common various procedures to hide wrinkles have become.  She claims that even thirty-year-olds are jumping on the band wagon.  She describes speeches she has attended where the presenters eyebrows didn’t raise or their foreheads didn’t wrinkle when they “frown”.  She asks (herself) about others, “Who are you?” because she doesn’t recognize some of her acquaintances with their expression-less faces.

On Tuesday I had my annual appointment with my hematologist.  It has been two years since my diagnosis of chronic lymphocemic leukemia. CLL is a form of cancer in which increasing abnormal blood cells push out normal blood cells.  Eventually, it becomes difficult to fight off infections.

There is no cure for this disease, but it can be treated.  It's all about the numbers.  So, twice a year, my blood is tested, and once a year, I see my hematologist who looks for increased numbers of abnormal cells and swollen lymph glands and asks about night sweats and other symptoms

About 363 days of the year, I don't think about my CLL.  Thinking about it doesn't change anything, and there is nothing I can do to stop it.  But when I have my semi-annual blood test, and when I see the doctor, I am reminded that I do have cancer.

Walking back to the car after my appointment, I felt sad.  My numbers are a bit worse (they don't go the other way), but not alarming.  Still, I wish that I didn't have this disease.

We had friends over for dinner that night.  We sat outside in the garden.  It was a gorgeous evening.

I am a sentimental slob. I cry when I am happy and when I am sad. I weep at weddings, and have been known to cry at Hallmark commercials. I cry every year at the NBC Nightly News feature on college graduations. And this one was no different.

For those of you unfamiliar with this annual event that lasts about three minutes, NBC shows snippets of commencement speeches interspersed with graduates jumping with joy. Messages written in tape across their caps say things like "Thanks Mom." Toothy smiles are everywhere. Pride is everywhere.

This year graduates heard from Tom Hanks, "The jig is up; the clock's run out."; Thomas Friedman talking about the Arab Spring and urging graduates to, "get out of Facebook and into someone's face"; Amy Poehler noting that this year's graduates were young when planes flew into the Twin Towers and reminding them that they quickly understood what it was like to be out of control.

Like graduates of all times, they face an uncertain future. In a year of tsunamis, earthquakes, tornadoes and uprisings, it's impossible to predict what lies ahead.

But this year's graduates are going to make a difference. We depend on it.

Sunday was our son Seth's birthday. He spent it on the Ile Saint-Honorat, off the coast of France, part of his long summer trip as the Frugal Traveler. I think this was his first birthday alone, away from everyone who loves him.

We didn't feel sorry for him. Being somewhere in France in May isn't hard to take. But, somehow I felt bad enough about not being able to talk to him on THE day that I considered playing an audio tape from his fifth birthday party, until I realized we no longer have anything that plays audiotapes.

I am sure that all mothers think about the birth day of their child when they're celebrating a birthday. I had a difficult labor with Seth which I promptly forgot once I held him. He was born during a heat wave, and it was hot on Sunday. In the house where we raised him the rhododendron always bloomed on his birthday. In our empty-nest house, we also have rhododendron, and on Sunday, they were blooming.

We did finally speak to him on Monday via Skype. I asked him if he had been lonely the day before. His answer? "No." Thanks to Facebook, Twitter and email, he heard from everyone. Including us.