Peter and I went to a small graduation celebration dinner on Thursday evening. I had helped the graduate navigate the sometimes choppy waters of completing two master's degrees at once, and in the process, we became friends.

I often meet students' families at graduations, but only rarely am I invited to their homes. And this time, Peter was included in the invitation, so I accepted. The graduate's family is very prominent. Their name is associated with high society, and the host's father served in President Kennedy's administration.

Their home was elegant with many historical and other artifacts. It was understated. It had a beautiful view. I think I could adjust to living there.

What was so amazing was how welcome and comfortable Peter and I felt. The conversation flowed easily, and it was as if Peter and I were the star attraction. The food was delicious, prepared by the hostess, I am sure without any help.

I am far from perfect. (Just ask Peter, my children and the people I work with.)

But my parents taught me to do what is “right.”  I still send hand-written thank you notes.  I do not run red lights.  I got the wallet I found on Monday back to its rightful owner.  I don’t like owing money so I don’t have overdue bills.  I got my papers in on time in college, and I never complained to a faculty member about a grade.

That’s why when I see drivers accelerate as a traffic light turns red (especially if I am trying to cross the street) or people not picking up after their dogs, it annoys me.  And people who get in the “six items or fewer” grocery store line with a dozen items or more are subject to my scorn.  When I see our members of Congress disrespecting each other’s ideas or beliefs, I get angry.

Sometimes I am too hard on others.  But in the end, I am hardest on myself when I have not done the right thing.  I have to be better about letting things go.

On Friday I was angry at seventy-five percent of the four most important men in my life. I believe I had some cause, but the details don't matter. I was pretty miserable. (Okay Mom, I hear you saying "Nobody loves a sourpuss.")

Here's the root cause. It's late May. It's supposed to be warm, but the heat has been on in our house all month. We haven't had a really sunny day since Easter. I've gotten drenched on a number of bicycle trips to or from work. And I'm working super-long hours as we wrap up the school year. On top of (or because of) all that I had had a sleepless night on Thursday.

Peter pretty much knows to keep his distance when I am like this. My problem is that I am unable to get away from me.

One of the great joys of our lives comes from experiencing other cultures. From the time our kids were eight and ten until it wasn't "cool" to go with your parents, we took some wonderful trips together. A ranch vacation in Wyoming, a house exchange in London, a trip down the Nile, a long hike in Crete. and more.

But we were always (and still are) budget travelers. Once, we stayed in an "aparthotel" in Jerusalem that barely had the basics. Dealing with its shortcomings was a nuisance, but it allowed us to experience the daily life of the Israelis, and we laugh about it now.

Maybe that's why when we traveled to Nicaragua with Seth last summer, we were happy to keep within the meager budget he was allotted for his Frugal Traveler column. This summer we will join him for a week again, and we can't wait.

To quote him, "The more you spend, the less you experience."

Stuffed in an envelope with an old glasses prescription and some long-ago paid bills, was a copy of the poem I gave to our son Seth when he turned eighteen. That was twenty three years ago this month.

I share it with thanks and apologies to the author whose name I can't find.

So you're eighteen.
God bless.
I was eighteen

A lifetime ago.
I was so grown up.
Knew everything

Was going to live forever.
And now I'm mortal.
And don't know so very much.
Like how you got to be eighteen so fast.

Or what I'm going to do when you're gone.
Which is now.

Grammy Gets a Hit

We spent the weekend of Mother’s Day with our son Jeremy and his family.  The grandchildren have changed in the three months since we last saw them.  Grady, age four- and-a-half, looks like someone stretched him out.  No longer tank-like, he is tall and thin, much like his older brother.  Leo, a seasoned first grader, is growing up faster than his father likes.  Much to their parents dismay, a friend who won a new IPOD gave his old one to Leo.  Now weekend “screen time” counts as time spent on the IPOD as well as time spent watching TV.

And then there is baseball.  The kids live on a dead- end street that they use as their field, and it works.  A “team” can be one-on-one or father Jeremy vs. the two kids, or as it was on Mother’s Day, Gramps, Jeremy and Leo vs. Grammy, Grady and neighbor Tess.

Gramps, at 81, hit two homeruns.  Grammy was a little rusty and struck out a few times before launching a solid single. 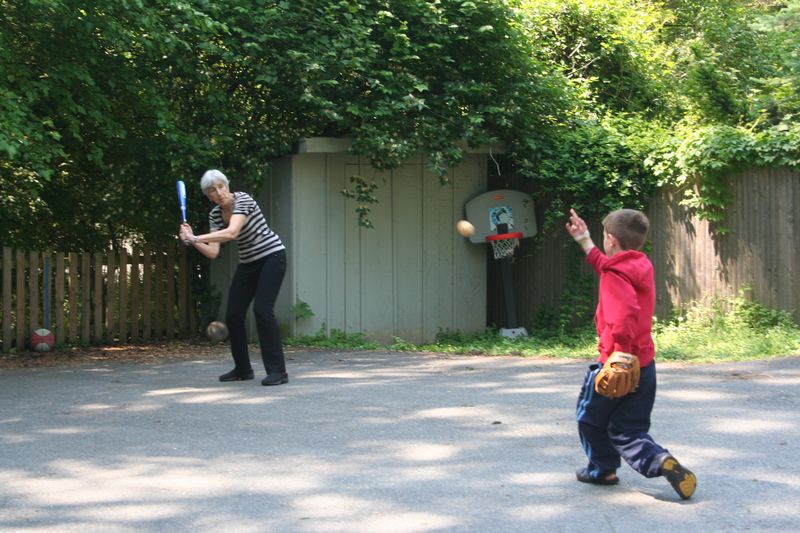 It was a great weekend.

For forty-six years, I’ve I have taken Peter’s one-liners in stride.  Some of them are very funny.  Others make me roll my eyes.

(1) On a recent walk, we spotted a nesting hawk on the ledge of a commercial building.  (OK, we didn’t spot it, but there were a lot of people looking up.)   A few moments later, walking around the reservoir, we encountered a man with a camera that had a long lens.  He looked like a birder, and I thought he might want to see the hawk. So I called out to him and explained what we had just seen and where.  He seemed grateful.

Peter’s comment as the stranger started off: “That guy is strictly for the birds.”

(2) While out with friends last Friday, the subject of the upheavals in the Middle East came up. Peter’s comment: “Let’s get Syrious.”

Once when I suggested to Peter that he might want to censor some of his remarks for quality, Peter protested that spontaneity is everything.

I recall our driving Seth and his friends somewhere long ago.  Peter was at his best with the one-liners during that trip, and one friend of Seth’s remarked—“Now I see where your sense of humor comes from.”  He meant it as a compliment.

Some of Peter’s one-liners are gems.  Some are not.  But he’s not about to stop offering them.  Even now, the kids can make it all worthwhile by chuckling and responding. “Good one Dad.”

I have been wondering what will happen to cookbook publishers in the Google era. Even though Peter and I have a large cookbook collection, we'll often Google, say, "gluten-free rolls" rather than look through our cookbooks. It's really easy, and by the way, our latest "gluten-free rolls" were excellent

The other day I noticed a shiny new cookbook on the desk of a young colleague named Joe. As someone who already has way too many cookbooks, I couldn't help asking if he is a cook himself. It turns out that Joe likes to cook. And more interesting, he collects old cook books from used-book stores or yard sales. He described one of his favorites in which the ingredients are measured by "a handful" or "a pinch".

Joe boasted that he owns a first edition of Julia Child's Mastering the Art of French Cooking. As a fan of her French Chef TV show, I remember buying a "first edition" of that classic when it came out.

So, yeah, I have a first edition of Mastering the Art of French Cooking too. Come to think of it, I guess I have a lot of first editions of books that were newly published when I bought them years ago.

At this age, I consider myself a first edition.

Where We Spend our Waking Hours at Home 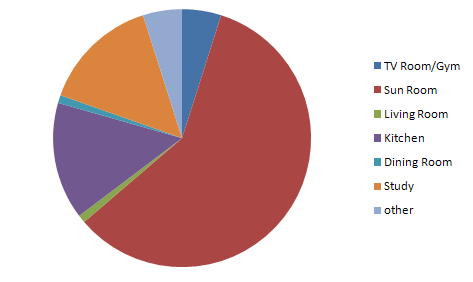 Sixteen years ago this month, we moved to our "empty-nest" house. It's a mini-version of the larger home we raised the kids in, and it still has room for the whole family at Thanksgiving.

Most of the time, however, it's just Peter and me. And most of the time, we don't even go into half of our rooms. Take the living room. Except for the rare occasions when we have more than four for dinner, we don't use it. That's because we have a small sunroom with a sofa that is big enough to hold a few guests (and allows us to stretch out). That's where we "live."

We also have a formal dining room. We have not used it since we enlarged the kitchen twelve years ago. It has our original dining room furniture and a corner cabinet that displays my mother's china and crystal. It's more like a museum.

Some day we may have to downsize again. Until then, I'm OK with my un-used square feet. Thanksgivings come around pretty fast.