My father was all about work. He loved what he did, and he was never ready to retire. When he finally did give in, he didn't know what to do with his time. He didn't play golf (or shuffleboard). He didn't live long in retirement, and sometimes I think he died of boredom.

I thought about my father and what he missed by just a generation when I read The Big Shift—Navigating the New Stage Beyond Midlife, a new book by Marc Freedman, founder of Civic Ventures. The Third Age is a "new" stage between the middle years and true old age. Freedman is a strong advocate for using those years to continue to contribute to society and to one's own growth. He tells stories of lives re-invented after age fifty, of a Teach for America Corps member who at fifty-something trained to be a teacher while living in a dorm with twenty-two-year-olds and of a "retired" doctor, serving the poor with such outstanding medical care that people with the ability to pay for the most expensive care flock to his clinic.

In his book, Freedman suggests resources for further education, for volunteer opportunities, internships and much more. He guides us through ten steps that might help us plan for a more fulfilling later life. Sixty is not and will not be the new fifty. But with life expectancies on the rise, and with the help and inspiration of people like Marc Freedman, sixty can be the new sixty.

When looking for a repairman, a restaurant to try, or a place to buy something, I prefer to depend on the recommendation of someone I know. That is not always possible, so sometimes I have to look to "raters". But now I am beginning to wonder about them.

For example, I recently read an article about the Better Business Bureau, an organization I used to turn to to check out, say, a landscaping company. In a recent "The Haggler" column in The New York Times, I learned that if an organization is a paying member of the BBB, complaints about that organization seem to be buried in, or even disappear from, the Better Business Bureau website. The article was compelling and the BBB's response to it a week later was anything but reassuring.

We also have checked out Trip Advisor for travel advice. Last January, when we were in Tubak, Arizona, an artists' town near the Mexican border, we visited a number of shops, and bought some lovely gifts. Before we left, we remembered that Trip Advisor had recommended one store (and one store only) in Tubak, so we looked for it. It turned out to be a tacky souvenir shop. So much for our trust in Trip Advisor.

Our neighborhood of seventy-five homes has a listserve. We ask each other for advice about just about anything. I'll take my neighbors' recommendations over the Better Business Bureau or Trip Advisor any day.

There are five very important males in my life: my husband Peter, our two sons, and our two grandsons. I never get enough time with any of them (except maybe Peter). But I especially miss our older son Seth who, as The New York Times' Frugal Traveler, is the hardest to pin down for some quality time simply because he's on the road or in his second home in Brazil more than he is in New York.

So when we had him all to ourselves in New York City for forty-five hours last weekend, it was pure joy. 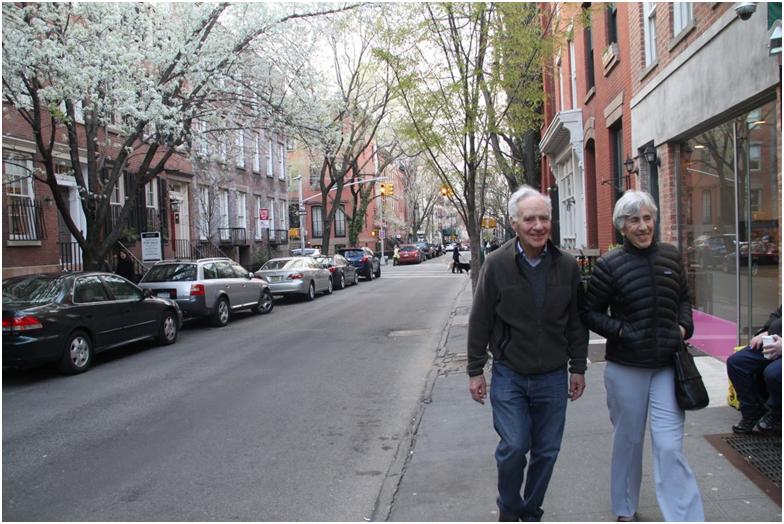 It didn't matter that we got to the Museum of Natural History too late to get tickets for its blockbuster exhibit on the brain, or that there were umbrella-breaking winds and torrential rain on Saturday. It didn't matter that there were no cabs as we made our way to Lincoln Center and therefore missed the first fifteen minutes of War Horse. Or that we had to walk through ankle-deep puddles to hail a cab afterwards.

What was important about the weekend was that we were part of his life. We ate at restaurants he likes. We had coffee at a café where he often writes. We rode his subway. We laughed through a play starring Chris Rock that has a word in the title that I don't feel comfortable saying, let alone writing. He was completely generous with his time.

I remember that my mother always asked me when I would be back again after my visits home. I understand how much it means to have a next visit on the calendar, and we don't have that. But this time, I left without my usual tears.

I was so grateful for my son time.

There are too many orange juice choices in my supermarket—no pulp, some pulp, lots of pulp, added calcium, and low acid.  But there is no choice about the downsized packages.

The consumer can’t help but notice that the orange juice container has shrunk.  No longer equal in size to the half-gallon milk container that stands next to it on my refrigerator shelf, the carton boldly brags that it has the juice of sixteen oranges. Nothing notes that the last carton I bought boasted the juice of seventeen oranges.

Obviously, the price was not reduced.  Only the container was, insulting the consumer, aka me. To make matters worse, this week I noticed that my breakfast gluten-free bagel was smaller, and like the orange juice, the price had not changed.

So when we went to Costo, I was delighted to see that their four-packs of orange juice still had the sixty-four ounce cartons.

At least until they run out.

Eons ago, after I graduated from college, I lived with my friends, Betsy, Joanie and Joyce. Only Joanie and I stayed in the same city, so my contacts with the other two have been few, especially in recent years.

But Betsy and her husband were in town last weekend for a reunion of her husband's law school class, and they visited us. Honestly, it was as though we had never been apart—laughing like old times.

I asked about our roommate Joyce's husband because he was fifteen years older than she when they married, and I didn't know if he was still alive. He is. But this once highly energetic and charming man has dementia plus physical problems and requires care 24/7. This led us to a quality of life discussion, and that's when Betsy told us about her father who had serious dementia, but seemed to enjoy life in spite of it.

The family first noticed it when her father couldn't find his way around his home-town airport that he knew so well. Betsy became concerned and sent him to a doctor friend of hers. The doctor told Betsy's dad that he seemed to have a memory problem. Without missing a beat, his patient replied, "Well Doctor, what do you want me to remember?"

Later, when Betsy alerted her brother Jerry to his father's fading memory, she suggested he come visit while his dad could still recognize him. So Jerry came to visit his dad and showed his father a newspaper article about a recent accomplishment of his. Betsy's dad turned to his son and said with enthusiasm, "Oh, you have the same last name as I do."

Betsy's dad lived to ninety-seven. I am sure he died with a smile on his face.

A Ten of a Day

It's pretty rare to have a perfect day. But that's what Friday was for me.

I hopped on my bicycle under a blue sky to get to work early to greet a bunch of happy people who were thrilled to have been accepted into a graduate program at my school. About a hundred and fifty beaming faces of all colors and nationalities attended New Admit Day.

Many of them had been just an admissions folder to me, or an email inquiry, or a phone call. Until Friday. During the day, I did a few presentations and met with many of the potential students one on one. Everything went well.

In the evening, we had dinner with good friends in a restaurant we hadn't tried before, and each course was better than the one before. It was also a day when both children checked in. What more can one wish for?

But there was one more thing. A former roommate of our son Seth appeared in my office doorway unexpectedly. I hadn't seen Eric in a number of years. This is how he greeted me.

Now that was a good day.

It's hard to pick up a newspaper these days without finding an article about the declining use of telephone conversations and the rise of texting. The average teenager is said to send/receive about three thousand text messages per month. Just the other day, a friend told me about a local teenager who was sitting on the living room sofa next to her best friend. Perhaps three feet apart, they were texting each other.

MIT professor Sherry Turkle, who has written extensively about the effects of computers on our lives, describes this kind of behavior in her latest book, Alone Together: Why We Expect More From Technology and Less From Each Other.

1. There is a growing tendency to text rather than talk.

2. Online, we perform. Our Facebook page is not who we really are.

3. We are never "alone", and therefore, we are in danger of losing our capacity for solitude.

I took an hour out of my work day to attend a talk by Professor Turkle. I arrived late, and knew that I would have to leave early for a meeting so I sat at the back of the room. When she described her Thanksgiving dinner last November, she admitted that although relatives had flown in from far away, they all had their handheld devices on the table during the meal.

I found her talk fascinating and plan to read her book. However, that didn't stop me from glancing down at my Blackberry. Like her Thanksgiving guests, I was unable to disconnect.

What I Tell; What I Don’t Tell

My first boss after college was great. We worked together for five years, and got along fine. One day, however, he seemed to be holding something back. So I said, "C'mon, you don't have any secrets from me." He replied, not missing a beat, "If I thought that was true, I'd have to kill myself."

That exchange from fifty years ago came back to me yesterday. One of the people we had invited for dinner last night confirmed by phone in the morning. She said, "I won't have any questions for you, because I keep up with you by reading your blog." I mumbled something about I would have plenty of questions for her, and that was the end of that.

It is true that blogging is sort of a one-way communication. And it is true that my friends who read my blog know more about what's on my mind than I do about what's on theirs. But one thing is for sure. If I thought I didn't have some secrets from my blog readers, I'd have to kill myself.