Growing up, I was lucky to live on a street full of kids. We were in and out of one another's houses all the time. I was usually the first one to go home. When asked why, I would reply, "I have to go because I have things to do." It got to be a joke. "Oh, Judy has to leave—she has things to do."

I thought about that the other night while waiting for a bus after a long day at work. It's bad enough that I can't ride my bike because there is too much snow. But, two nights this week, I had to wait almost thirty minutes for a bus that normally comes every five minutes.

And what was I thinking as I stood on the corner with a bunch of other impatient people? I was thinking about all the "things" I could be doing with that time. We were just back from vacation. I had been totally relaxed. But my work did not go away while I was gone. It had accumulated, and I am paying the price by working doubly hard to catch up. I had to get home because I had so much to do.

Peter and I did quite a bit of hiking during our recent Tucson vacation. Our rental condo (by sheer good luck) was a five-minute drive from Sabino Canyon, with its many beautiful trails. The Arizona desert from Phoenix south is stunning with its signature Saguaro cacti standing soldier-like on the sunny sides of the mountains. We never tired of looking at them.

We also hiked in Catalina State Park. The pure silence at the top of the Canyon Loop, where we stopped for a brief rest to gaze in wonder at our surroundings, was only interrupted by the Arizona birds, tweeting their messages. It was magical.

We couldn't help but think of home, where the snowfall that day would measure seventeen inches.

There were many memorable moments on this trip—brilliant pink and orange sunsets, a visit to the remarkable Kartchner Caverns, the not-to-be missed Desert Museum, the artists' colony in Tubac, and some new friends who generously shared their knowledge of the area.

Best of all, we discovered that there are still new adventures awaiting us. As Peter put it, "We may not be what we used to be, but we are still a great travel team."

We try to get away from some of the short and bitterly cold New England winter days. In past Januarys, we've biked in New Zealand, roamed the streets of San Miguel d'Allende in Mexico, watched giant tortoises in the Galapagos and more. But we decided to do something less hectic this year and chose to spend twelve days in Tucson which promised blue skies, a desert experience, a large university and reasonably-priced condos for rent.

A phone call from the kids back East asking if we were OK was not part of our plan. We were visiting Tucson's spectacular Desert Museum when they called. It was only when we turned on the TV back in our condo that we learned of the tragedy's toll. Memories of Kent State, Columbine, 9/11 had us glued to the TV just like everyone, filled with sadness.

The following day we went to visit Tonhono Chul Park, a botanical garden, and as our GPS led us past the corner of Ina and Oracle, we saw the yellow police tape, the FBI jackets, the giant TV trucks, just 100 yards from our destination. We passed Ina and Oracle four times that day, just ten minutes from our condo, a Safeway we could easily have been shopping at.

Almost a week later, while we were looking a bit lost on the giant University of Arizona campus, a girl in a golf cart stopped and offered to show us around. She drove us to University Medical Center where we walked among the candles, balloons, posters and teddy bears of the memorial to Congresswoman Gifford and the others injured or killed at the Safeway.

That sad event was the defining moment of our Arizona vacation. 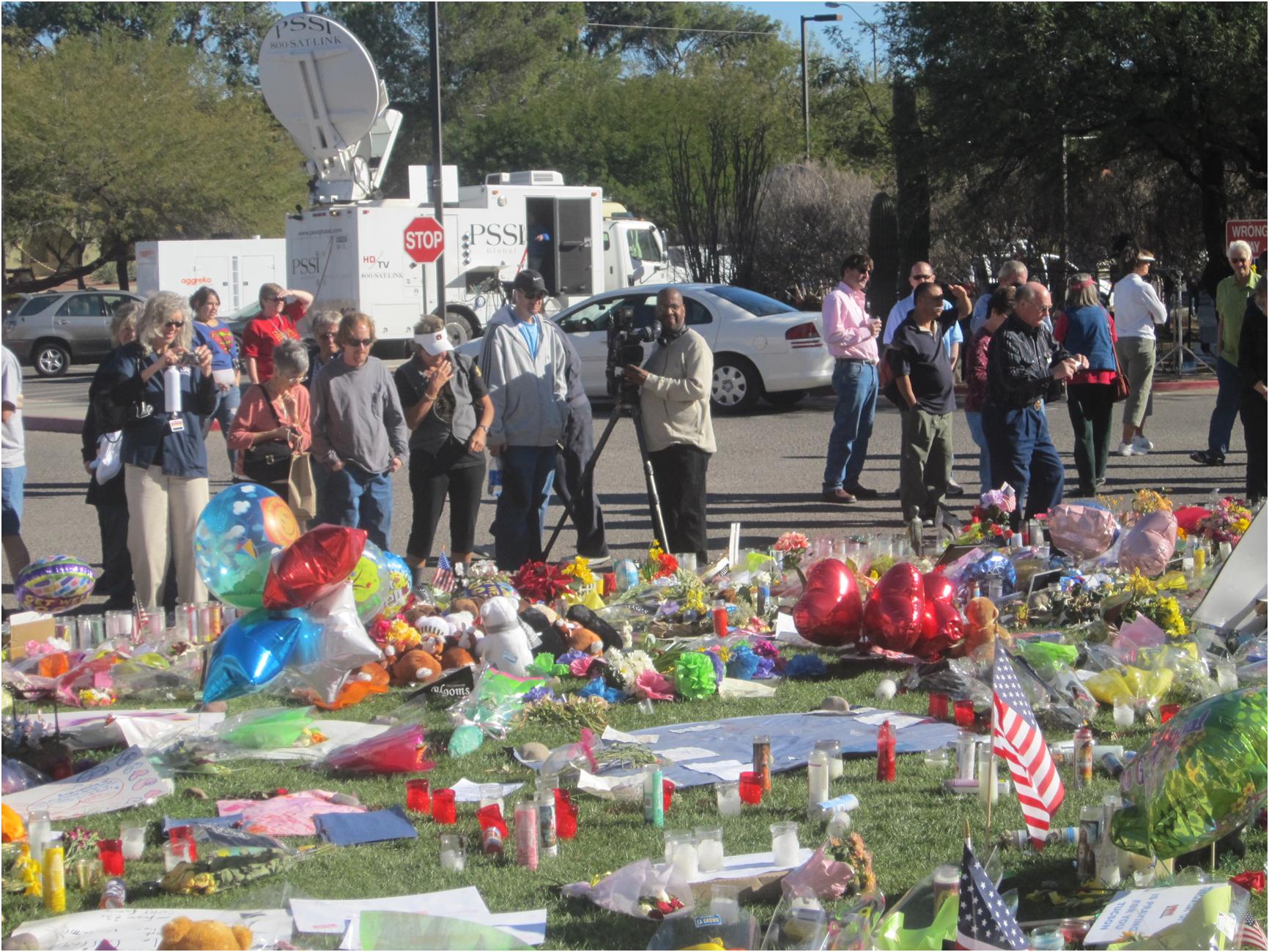 I watched Peter peel a navel orange, his dessert at lunch the other day.  “You do peel oranges absolutely elegantly,” I commented.

“I learned that from my grandparents,” replied Peter.

I expressed my surprise that he had never mentioned that in all the years I’ve watched him  peel oranges.  And then I asked him how many years that was.

He looked a little chagrined when I had to answer for him, “forty-five” (unsaid by me—how could you not know?).

But he had a response, “How am I supposed to know?" he said.  It changes every year.”

After forty-five years, he still makes me laugh!

I have a new worry.  I am afraid that one of these days the newspaper will stop being delivered to my door.  I don’t know what Peter and I will do without a newspaper at breakfast.  We could bring laptops to the table and read online, but that wouldn’t be the same.  Plus, we only have one laptop.

It isn’t that we don’t have anything to say at breakfast.  But we talk about what we are reading.  To be specific, one of us reads what’s interesting in their section of the paper out loud even though, of course, the other person will have that section soon.

A couple of weeks ago, I was reading that a Danish shipping company is paying $2.4 billion to a South Korean energy company to acquire its Brazilian pre-salt oil deposits assets (whatever that means).  I read it to Peter, observing that it was a great example of our “flat world”.

Peter then reported that James Franco, the lead in the movie 127 Hours, enrolled in four graduate programs simultaneously after his BA, one each in film, writing and poetry and one leading to a PhD in English.  He’s published a book and currently has a solo art show in a New York gallery.

I could survive without coffee or my favorite granola at breakfast time, if I had to.  But please, please don’t take away my morning paper.

Two and a half million boomers are going to turn sixty-five in 2011, according to an AARP survey.  I was almost a baby boomer, give or take seven years.  But those seven years made a huge difference.

My women friends back then who finished undergraduate studies without a husband were more or less “failures”, especially if, like me, they hadn’t earned a teaching or nursing degree.  I attended a lot of weddings the summer I graduated.  Just not mine.

For baby boomer women, graduate school was a viable choice.  I was out of college for fifteen years before I started grad school.

Many incipient 65 year-olds told AARP that they will continue to work.  Of those currently employed, forty percent plan to “work until they drop.”  Sounds a bit like me, and I’ve been at it seven years longer than they have.

I have a lot of baby boomer friends. So I think I deserve honorary membership in the baby boomer generation.  I’m hoping to be an example for them by living fully in my 70’s.

The 70-Something blog will be three years old tomorrow.  This is its 316th post.  So far, I have kept my promise to write twice a week.  (In case you haven’t noticed, I am rather compulsive.)

My blog provider lets me see how many readers I have, and although I am not The Huffington Post (and don’t want to be), my numbers are steadily increasing.  People have asked me if I ever run out of things to say.  So far—no.  My husband Peter can attest that I always have something to say.  But am I saying something meaningful?  Are my observations about being in my eighth decade (yikes!) connecting to others?

I have heard from readers who are a couple of generations younger than I am and from folks who are older than I.  I am very pleased when anyone takes a few minutes to read what I have to say.

I began this blog to process what is happening to me as I grow older.  Hearing that keeping a journals may be good for one’s health may have had something to do with it.  By now, it’s as much a part of my life as brushing my teeth.

Please continue to read.  And thank you.

Andy and Loren are next-door neighbors of our Maryland kids.  We always enjoy seeing them when we visit Jeremy and his family. Andy is also co-founder of Jeremy’s website, www.Jasmere.com, which makes him almost “family”.

We never expected Andy and Loren to want to visit us when they came to Boston for a couple of days over the holidays.  After all, we’re just the parents of their friends.  I don’t recall seeking out my friends’ parents very often.

They called us when they got here, and we invited them to our house for lunch.  They brought flowers.  We had a great time.

Their visit made our day.

When I am at home for the holiday break, I see dirt that I manage to ignore the rest of the year. So that is when I wipe down the cookbook shelves. We have a lot of cookbooks. Too many.

Several are about how to bake bread. Peter used to bake awesome yeast breads before I was diagnosed with gluten-intolerance. He hasn't baked any since then.

I gave some thought to tossing those well-worn-but-not-lately-used bread-baking cookbooks, but decided to consult with Peter first.

"If I should pre-decease you, would you go back to baking bread?" I asked. He looked a little sheepish as he replied.