On the day after Christmas, the East Coast finally got its share of the nasty weather that worked its way across the country. Peter and I were among the lucky ones who weren't traveling. We lined up the flashlights and candles and hunkered down.

Our son Seth was in town for a reunion with some of his friends the afternoon the blizzard started. The hosts moved up the party starting time so that he got back to us safely, though slowly, to join in the hunkering.

Although the lights flickered once, we didn't lose power. It was one of those magical evenings as long as you didn't have to go anywhere. 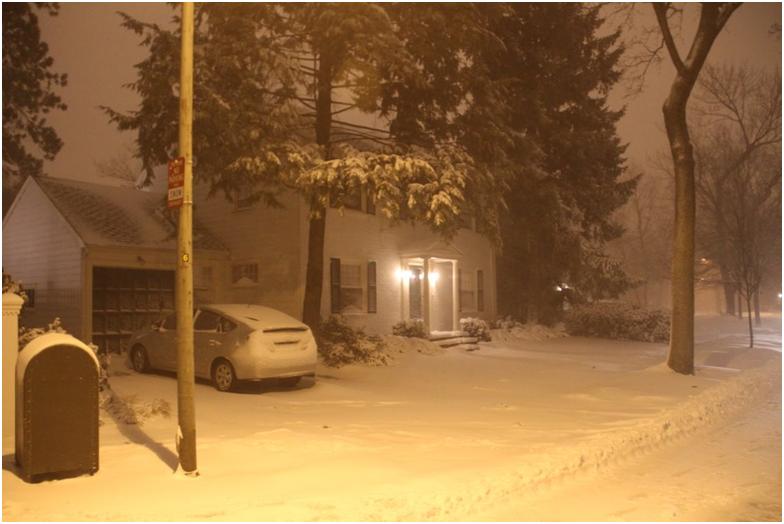 By Monday morning, we had fifteen inches and a snow blower out of commission. But luckily we had Seth, and he dug us out like any strong Bikram-yoga-trained son would do.

Like so many stranded travelers on Monday, Seth couldn't get back to New York City. We got to keep him for an extra night.

You've probably have never heard of Roy Neuberger who died on Friday at 107. Neither had I, although he made a lot of money and had an impressive art collection. But seeing his obituary on Christmas morning made me think about (and yes, still miss) my mother. Born on the day the Wright Brothers flew at Kitty Hawk, she would have turned 107 this month.

I was fifty-one when she died. How many times have I wished that she could be here to see her fine grandsons grown up? What would she (who never worked once she married my father) think about her daughter still on the job at seventy-two? And commuting to work by bicycle? And lifting weights?

She didn't live long enough. And I still feel her loss.

I don't go to work between Xmas and New Year's. I'll probably check my email occasionally and read some resumés for the position I am filling. But mostly, I'll do what I want to do. Here are my plans:

Read: Mountains Beyond Mountains, Tracy Kidder's inspiring book about Dr. Paul Farmer's work in the developing world, Tatiana de Rosnay's Sarah's Key, and Chris Cleave's Little Bee—just because they have been on the best seller list for so long. If I hadn't already read The Help by Kathryn Stockett, it would be on my list and if you haven't read it, it should be on yours.

Clean up and out: Up means the places that I never get to—like bookshelves-- and out means get rid of some possessions that haven't been used in months or years.

Study Spanish: My goals are modest, but we bought a subscription to Rosetta Stone and I'm going to really try to set aside some time each day to study Español

Movies: As many as possible. Definitely, The King's Speech and The Fighter.

I'm going to be busy, but it's a different busy.

It is no secret that there aren't enough ladies' rooms anywhere. Recently, we had to wait eons for a friend who had to stand in line to use the ladies' room after a concert. I usually don't use the bathroom nearest to my office at work, because it's never free. I walk to a less traffic'd place where I am often the only one there.

That ladies' room has two stalls. One day last week I thought there were two people in the stall next to mine until I realized that my neighbor was talking on her cell phone. It seemed to be a business conversation. Because I came in the middle and left before it was over, not only do I not know what it was about, I couldn't tell who was talking.

I wondered what the person she was talking to thought when they heard a very loud flushing noise.

The Joy of Cooking

When Peter and I started dating in1965, we each owned a copy of Mastering the Art of French Cooking by Julia Child. We both loved to cook, and I was impressed that his copy was more worn than mine. (At the time, I didn't realize that his copy was in worse shape than mine because he is a messy chef.)

When we got married in 1968, one of our favorite gifts was The Gourmet Cookbook, Volume II, and forty-two years later, one of our staple dinners is the broiled halibut with vermouth on page 149.

In the 70's we gave dinner parties all the time. They started after the kids were in bed, and we actually got dressed up for them.

Somehow over the years, even though we have amassed shelves of cookbooks, we give fewer dinner parties. And when we do, we almost never have more than six people. Because Peter is now retired, he is the chief chef, at least on week days because I am at work. So, except for some weekend cooking I was semi-retired from the kitchen.

I'm not sure why it happened, but last weekend, I got the urge to cook. I made a marvelous tomato soup, flavored with honey and cream and a new chicken recipe with roasted red and green grapes that was in the paper that week. I decided that since I didn't work between Christmas and New Year's I would invite friends for a week-night dinner. In addition, it's my year to do New Year's Eve dinner, and I'm planning a rack of lamb and all the trimmings. Dessert is still TBD.

I'm re-inventing my inner cook, and finding, once again, that there is joy in cooking.

I always told our children that life isn't fair when they reported some injustice they had encountered. That never made them feel better, but I kept saying it anyway.

Peter has a healthy view about fairness. When I say life isn't fair, he predictably responds, "Thank God."

So let me state that I feel ungrateful for what I'm about to say.

Eight years ago when Peter was seventy-two, we were "young". He was rushing off to teach his students every morning and retirement seemed far away. We bicycled in Switzerland that summer and Switzerland isn't flat. I'm sure there were some imperfect moments, but l can't think of any.

Now, eight years later, I am the one who is seventy-two. I rush out the door to go to work in the morning. But we don't bike anymore. Because Peter is now eighty, I don't get to do a lot of the things that we could do when he was my age.

And some times, that doesn't seem fair.

Me and Dorian Gray

Thanks to digital cameras, our family takes a lot of photos when we are all together. I always choose one of the whole family and one or two of the kids and grandkids and make 5 x7 enlargements for home, for my office, or for both.

Usually I just place the new pictures in the frame on top of the old ones, but last week I had to remove the old ones so that I could close the frame.

You may remember Dorian Gray, the handsome young man who, upon seeing his portrait, made a deal with the devil that his portrait would age while he would remain young. Gray turned out to be quite a cad, but a good-looking cad at that. I thought of Oscar Wilde's The Picture of Dorian Gray when I spread the old pictures on the dining room table.

Suddenly, the last seventeen years were facing me:

1994 –The four of us at Jeremy's college graduation

Unlike Gray, I am still young in the 1994 photo. But not in the mirror.

The odds are that Peter and I will not die at the same time. Statistically, I should outlive him because I am eight years younger than he is. But life is not statistics.

Peter doesn't want to outlive me because he thinks I take care of him. A number of years ago, our son Seth offered to take Peter as a roommate should I die first, but I think that offer may have expired.

Which brings me to this morning. Normally, Peter folds his laundered socks and puts them away. But today, I did it. And in his sock drawer, I found six "orphans". Turns out they all matched and he actually has three more perfectly good pairs of socks. My first thought was that one thing I wouldn't miss about Peter, should I outlive him, would be how badly he takes care of his clothes.

I decided to make a mental list of "at least I won't have to live with THAT anymore" things that might offer me some consolation in an un-hoped-for widowhood.

I couldn't think of anything else.

Am I Taking Someone’s Job?

The unemployment rate is dreadful. People are losing homes and struggling to put food on the table. Dreams are put on hold. Unemployed workers in their fifties fear that they will never work again.

And then there is me, working full time and earning a good salary well beyond normal retirement age. I know that I am making a contribution. But could my responsibilities (and salary) go to people who are younger and needier than I am?

Am I taking someone's job? Maybe. Would I leave a job I love to make room for someone else?