Knitting goes in and out of fashion. Which explains the paper box filled with knitting needles of every size and color tucked away on the top shelf of our linen closet. The box also contains assorted balls of leftover yarn, a few pattern books and who knows what else.

Over the years I've knit scarves and sweaters and other items which I have lost or discarded. I do have a favorite picture of me and Peter from my thirtieth birthday on a hotel balcony in Cortina, Italy in which I am wearing a purple and lilac patterned ski sweater knitted by yours truly.

More recently I've concentrated on afghans. And I have a favorite pattern, "Likety Split" from a Brunswick pattern book, volume 843. The book cost $5.00 so I know it's old. 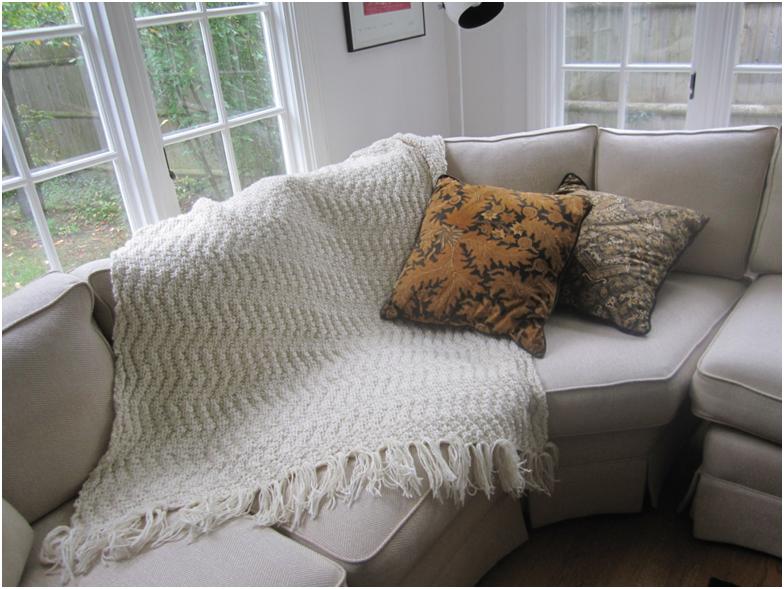 I don't remember when I knitted the first or second one, both of which we use at home. I know I made one for Jeremy and Katrina when they got married eight years ago, and it pleases me to see it on their sofa each time we visit.

But I thought I had one more afghan in me, and on July 8, 2008 I cast on 136 stitches with two strands of yarn and started again. This one was for Seth, our peripatetic son. I figured that at some point (still to be determined) he'd stay in one place long enough to appreciate having his very own.

Not a Great Week

My friend Mady used to say, "If today were a fish, I'd throw it back." I could have said that about this week.

On Monday, I had my annual mammogram, and there was a change from a year ago. It just needs close watching for now, but I didn't get my usual "I've dodged a bullet again" feeling.

On Wednesday, I had a chest X-ray for a persistent cough. It looked OK. While I was there, my doctor gave me a flu shot, and removed some wax in my ear. He had to work so hard on my ear that it became inflamed so he gave me a prescription for antibiotic ear drops. Then while I was in a meeting late Thursday afternoon, I began to feel awful. And on Friday, I gave in and came home early with the flu, perhaps a reaction to my flu shot.

But something happened to save this fish of a week. Yesterday there was a wonderful comment on the 70-something blog from almost 30-year old "Kate from Singapore".

Thanks Kate. You saved my week.

On September 21, 1980, I started my first full-time job since I became a mother. I had worked part-time after the kids were born at the same time as I was completing a graduate degree, also part-time. The boys were eight and ten in 1980, but they were still my babies, and not being home for them after school every day was weighing heavily on me. The headache I had at the end of that first day made me wonder how long I could last trying to be perfect mother, perfect wife, and perfect employee.

Two days ago, on September 21, 2010, I celebrated my thirtieth anniversary of working at the same place. It's true that I have had a lot of promotions and several different positions. But I still go in the same door every work-day, and I still love my job. The kids, of course, haven't been home for years, but they both were impressed when I told them of my milestone.

I didn't expect balloons and presents at work, mostly because no one I work with closely knew it was my anniversary. When I mentioned this to my new young boss at the end of an email as an afterthought, he responded immediately to the issue I had raised "And by the way", he added, "Congratulations and cancel your lunch plans if you have them.  I'd like to take you to lunch...  Let's plan on it."

We had a great time.

Although I frequently vow that I am in the de-accessing stage of my life, technology still seduces me.

In the past month, we have purchased:

1.  An internet radio, that lets us hear a station anywhere that streams over the internet.

2.  A new printer, not because ours didn't work, but because the new one is better.

3.   A Roku Digital Video Player that let us access our Netflix queue on our TV instantly and remembers where we were if we have to stop in the middle to answer the phone.

4.   A netbook.  This handy little device for internet and email is so convenient that it sits (barely noticed) in the kitchen and has eliminated the constant yelling back and forth up and down our stairs—"Are you almost off the computer?"

So the other night when Peter reported that several students in his new class had I-Pads and told me all the cool things about them, I declared ENOUGH.

Someone has to draw the line.

I'm not a big TV fan. I know there are many terrific shows, but somehow I don't get around to watching much. Exceptions: the news, the Academy Awards and baseball. A couple of years ago, I became addicted to Lost, but eventually it became too weird for me, and I lost interest.

I'm also not a big football fan. To me, it's a rough game with lots of people earning a fortune by trying to hurt one another.

So nobody is more surprised than me at how completely captivated I am by Friday Night Lights. It's not only football; it's high school kids getting hurt playing football. It's a Texas town where the houses of the team members have big signs on the lawn with the names and numbers of the player who lives there. A lot of the characters aren't so nice.

But enough people talked about it, that we decided to give it a try. We watched the DVD of the pilot, and we never looked back. At this point, we've watched about ten episodes of the first season, not even half way through. And there are two more seasons to go before we catch up.

Sometimes we almost get through an evening, but eventually either Peter or I will say, "Do you want to watch one episode?" And in a flash, we're in front of the TV.

Is it the excellent acting? The fast-paced plot? The up-in-the-air ending to each episode? A crush on Coach?

Try it at your peril.

Makeup and Me (a History)

I've never been big on makeup. I'm married to a man who has been known to want to take his thumbs to women's eyelids when they are heavy with eye shadow. So my policy has always been "subtle."

Young skin doesn't need a lot of cover up. But I do recall the day I caved in and wore makeup to work. I don't remember the exact date, but it was twenty-some years ago. I do remember the outfit I wore that day. (If I ever run out of topics for this blog, I can list in detail what I wore on similar important occasions in my life.)

Back then, and for many years thereafter, once I had a hint of a tan, I happily took the summer off from makeup. But a couple of summers ago, I had to stop those makeup time-outs at work because sunscreen was effectively preventing any tan.

However, I was still able to hold out on weekends year-round, at least during the day. I didn't think the checkout person at the supermarket or the shoemaker cared about my pale complexion.

All of that changed yesterday morning when I looked into the mirror before leaving to run some errands. I didn't like what looked back at me. So, I picked up the tube of tinted moisturizer. Not for the checkout person, not for Peter.

Putting Away the Whites

My mother taught me that I can't wear white after Labor Day. So, putting away the whites is always on my Labor Day weekend agenda when we are in town. And, having spent so many weekends away this summer, we were happy to stay home this Labor Day.

We had a great weekend—dinner out with friends one night, dinner in with friends another, a bit of yard work, and a bit of shopping. And wonder of all wonders, four nights of eight-plus hours of sleep. Heaven.

I whistled my way through ironing them in the afternoon because there was no baseball game to entertain me. By three, summer had been put away.

But not without a touch of sadness.

My Aunt Ruth, at almost ninety-nine, is a legend. Still beautiful, still active. She tried to resign from all her boards of directors when she turned ninety-eight, but her resignations were not accepted. She is the only remaining member of my mother's generation.

She's up-to-date on almost everything, but she refuses to have a computer. I can't email her so I call her often and fly to see her about once a year. Every couple of months, I print out these blog entries and mail them to her.

Recently I sent her a copy of "Mom and Dad—Meet My Budget," an article written by her great-nephew (who is our son Seth) that described our frugal trip with him through Nicaragua earlier this summer. Seth wrote about how his "older" parents tolerated the lack of amenities nicely.

Yesterday, I received a letter from Aunt Ruth thanking me for the article. She enjoyed it. She was impressed with Seth's writing. But the part of her note I loved said, "He happens to have the best parents in the world." I'm focusing on that part, rather than the next sentence which qualified it a bit.

Officially, there are almost three weeks of summer left, but it feels very over. And since I am happier during the long days, I do not welcome fall. Especially since it is followed by winter.

However, it was a great summer, full of family and friends. We had a week at the beach with the grandchildren and their parents and a memorable adventure in Nicaragua with our older son. Holding grandchildren's hands at sunset while they jumped the waves on an almost- deserted beach in Cape May, New Jersey and being stuck hubcap deep in mud on a rural road in Nicaragua were just two of the summer's many highlights.

Much to be grateful for.