Children say the darndest things.  They also live in the darndest places.  That’s why I write this from São Paulo, Brazil, third largest city in the world and a place not at the top of my “see before I die” list.

Like everywhere else, it has its plusses and minuses.  On the downside, the language is impossible to pronounce (at least for me), the city is huge and overwhelming, and it’s a long, long trip from home.  On the plus side, our son Seth is living here.  That trumps everything.

Twenty-four hours into our visit, I am no longer overwhelmed.  I am getting to know his neighborhood and the little café next door where this morning, my huge glass of fresh-squeezed orange juice was about a dollar.  We’ve walked into the center of the city and visited the municipal market full of, among other things, exotic fruits that I could never learn to pronounce, but happily tasted.  At lunch near the market, I had a plateful of food from the buffet.  The farofa, a grain-like Brazilian staple made from yuca flour and butter, was my favorite.  It has a pleasing nutty flavor, and I’d be happy to have it be a staple in my home too.

São Paulo is for foodies.  Dinner at Mani our first night was off-the-charts wonderful.  It would take a food critic to do it justice.  I recommend the falsos tortéis de pupunha e abóbora. 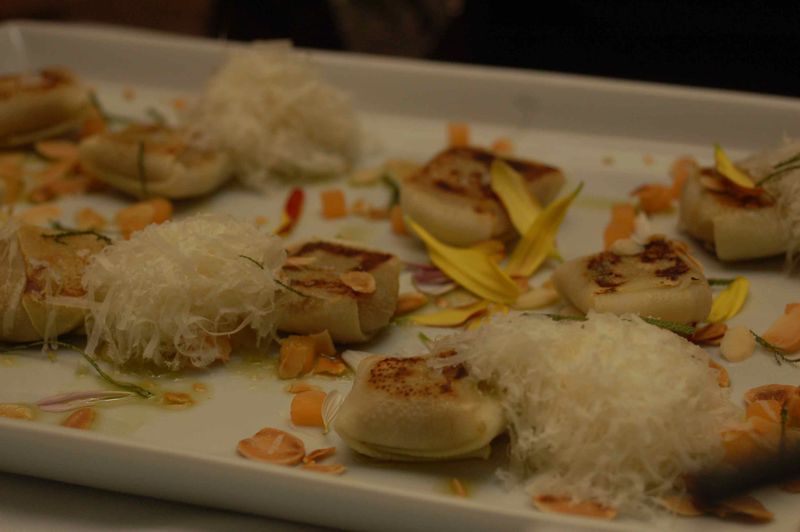 Music to My Ears

Back in Mozart's time, chamber music was played, well, in chambers. But that was more than two centuries ago.

As classical-music-lovers, we have always heard early music either in a concert hall or a church. That is until last Saturday when we were invited to hear a piano, violin and clarinet trio playing in the chamber (aka living room) of the clarinetist. There were ten people in the audience.

The program was Bruch, Milhaud and Mozart. The music wasn't amplified; the players were at most ten feet away. I was thoroughly absorbed in the music. I heard each note. I watched the musicians interact up close and personal.

You won't hear this group at Carnegie Hall. They are just a group of engineers who love to play music together for their friends.

Would I like to live in Mozart's time to attend more such concerts? No, but it sure was fun to visit

In New England, spring lasts about ten days.  And they aren’t even ten consecutive days.  We’ll have one day in the sixties followed by a week in the forties.  This pattern repeats itself until we wake up one morning to find that summer has arrived.

That’s why Friday was such a special day.  The temperature reached seventy. With clear skies and a light breeze, everyone looked for an excuse to be outside.  The daffodils and flowering trees burst into bloom.

Instead of hunkering down over my handlebars on my trip home from work, I rode slowly, peeking into yards along the way. I reminded myself that it wouldn’t be long before the fragrant lilacs would bloom and then at the end of May the rhododendron.

When I turned into our driveway, the bluebells and daffodils were vibrant.  I decided I always wanted to remember how they looked at that moment, and grabbed my camera.

On Saturday, it was cold and gray. 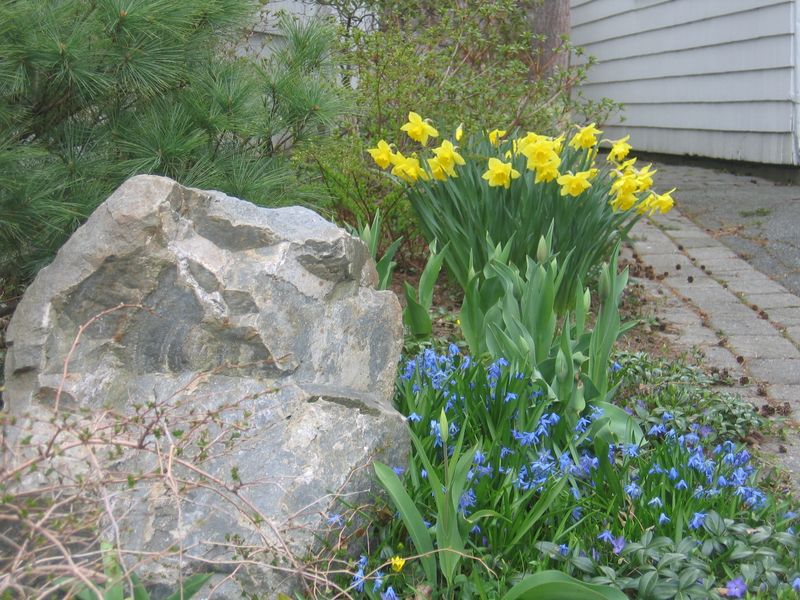 What I See Now

When I told my 93-year-old aunt that I was going to have my cataracts removed, she told me that she had been unhappy with the result of her own cataract surgery. Not what I wanted to hear just then.

When I asked her why, she explained that she was unhappy because the surgery allowed her to see her wrinkles more clearly.

So like most change, the results are mixed. On the up side of cataract removal, the world looks brighter. When I admired a colleague's "new" coat, she said I'd seen it every day for the last couple of winters. It suddenly dawned on me that it was a brighter and prettier color because I could see it better. After four weeks with my new eyes, I am still startled by how bright the light is when I open the refrigerator door. More important, driving at night is much easier.

On the downside, I keep seeing more things that need to be cleaned or fixed. I can see the pitting of the chrome on the light fixture over my bathroom sink and the dirt spots that have appeared on various walls.

Of course, the plusses outweigh the minuses. My doctor was right when she said, "Wait until you see the forsythia."

Yellow is a whole new color.

There is an old story about some folks who told each other the same jokes so often that they assigned numbers to them. Someone would yell out "seventeen," and the others would laugh hilariously. (I forget the punch line.)

I think of this story often when Peter and I are on a road trip because we always have the same conversations. For example, the following dialogue is mandatory.

Peter: Yes, but everyone is passing me.

Me: But you can still get a ticket.

Usually I add: We have cruise control. Why not set it at a reasonable speed, say 69, and let it keep us there?

To which he replies: No.

At some point I open a thermos and ask: How about some water?

And then there is a version of the following, depending on where we are.

Me: (to myself after an endless traffic jam) I told you so.

Like the folks who tell jokes, we could just assign numbers.

When our son Seth said he would be making a quick trip from Brazil to New York last weekend, there was no question that the rest of the family would drop everything and come from Maryland and Massachusetts to see him for 26 hours.

We didn't do the usual New York things like go to museums or plays. We just hung out in Seth's apartment in Jackson Heights. The grandchildren couldn't get enough of Uncle Seth. Neither could I. Not to mention assorted friends who stopped by.

We did venture into Manhattan for dinner Saturday night. Sure enough, more folks dropped into the restaurant including our grandchildren's other grandparents who happened to be in New York City from California.

On Sunday we brought in pastries for breakfast and empanadas for lunch. More people came by. It didn't matter that when we ate the empanadas outside in the garden, the wind blew the hot sauce Peter was shaking on them into our daughter-in-law Katrina's eye.

It also didn't matter that when Seth made Brazilian truffle-like chocolate goodies with his nephews, two-year old Grady picked up the jar of jimmies that the candies were to be rolled in and dumped them into the middle of the chocolate mixture.

The important thing was that we were together.

When it was time to leave, the grandchildren and Jeremy and Katrina piled into one car, and Peter and I into another.

The visit was way too short.

On Friday I went back to fifth grade. As part of a day of service, I spent four hours in a public elementary school. I expected to see changes since my grade school, but I did not expect to see a principal wearing a long-sleeved baseball jersey or the librarian wearing a baseball cap. What happened to role models?

I was impressed by the cart of laptops that was wheeled into the room. The students told me they've been using computers since first grade. Each student has an account and signs in with ease. Their assignment on Friday was to produce a report on the ruffled grouse, a game bird commonly found in Wisconsin. The students I was "helping" were on Google in an instant and with two clicks they got a Wikipedia article on their screens. They quickly cut and paste the text and pictures into a Word document. Then they made beautiful title pages, using all the art the MAC offers. In one more moment, they had printed and stapled their reports.

The frightening thing is that they never wrote or read a word of their reports. When I asked, they told me they didn't have to read it.

Are they our country's future?

Look What I Can Do

In most households, husbands and wives, partners, or roommates have designated chores, usually reflecting their preferences or strengths. So it is in our household. For example, although Peter is definitely capable of doing the laundry, he doesn't. When I had knee surgery, I had to stand at the top of the stairs to the basement and give him step-by-step instructions. Of course, as soon as I could get down the stairs on my crutches, the laundry was my responsibility again.

So when Peter was away for five nights at the end of March, it was my turn to do some of his jobs. I wasn't concerned about taking the garbage out to the street because that is straightforward and I've done it before. And although he cooks most weeknights, I enjoyed making just what I like to eat and eating it whenever I wanted to.

But there were some challenges. Take the new bottle of balsamic vinegar, for example. Normally, after 20 seconds of trying, I turn a resistant bottle top over to his stronger hands. This time I had to resort to hot water to loosen the cap.

Unbelievable as this may sound, I had never loaded up our CD player. It was always Peter asking, "Mind if I put on some music?" But in his absence, I wanted some musical company. It took me a bit of fiddling around, but I did manage to push the right buttons, fill the five slots with some of our favorite music and actually get it to play. What a triumph!

And then the side mirror on my bicycle became loose (a result of biking over way too many potholes). It has always been Peter who handled this type of challenge. But there I was, Allen wrench in hand, finding the right sized key, and succeeding in tightening the mirror, to my great satisfaction. All in all I felt very self-sufficient, although lonely.

I considered myself very fortunate to get through that time with no computer crashes.

I know my limitations.